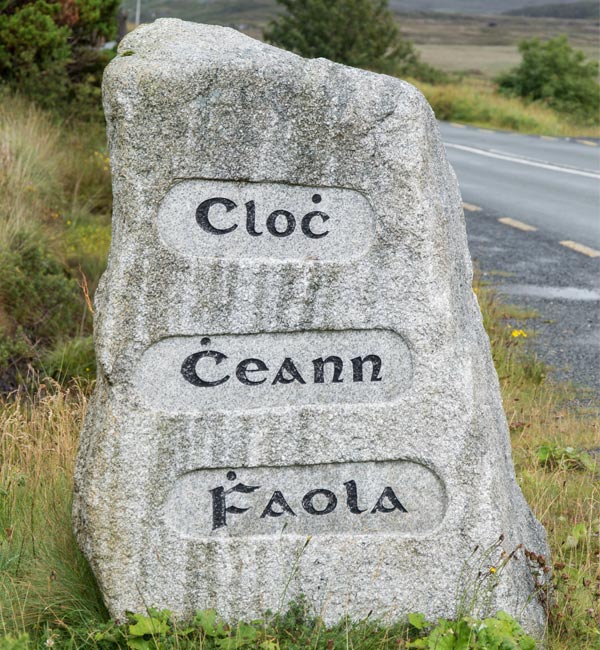 In many parts of Western Europe, people still speak "Gaeilge", a dialect known as Gaelic. Gaelic is spoken not only in Ireland, but also in Northern Ireland. A total of around 1.6 million people, including the descendants of Irish residents in the USA, Canada and Australia, speak the language and use it as a second language in everyday life. More than 70,000 people speak the Gaelic language in Ireland every day as their first language or mother tongue. The Irish are known for always having something to tell. Most of the time they talk in their mother tongue, Gaelic or Gaelic. The Celtic language is one of the oldest and most historic written languages ​​in the world.

Visitors to Ireland hear the unmistakable sound of this very special language all over the country. Gaelic is spoken in shops, in schools and in the numerous pubs as well as in the streets and at the popular festivals of the Irish-speaking areas, the Gaeltacht. Immediately after arriving on the Emerald Isle, visitors encounter the traditional Irish language through street signs and place-name signs. In the Republic of Ireland these are always bilingual in English and Irish. Many holidaymakers in Ireland still have to get used to the sound of the Irish language. With a visit to one of the many Gaeltacht pubs, you can quickly get into conversation with the locals and be surrounded by the Irish language. There is also a lot of interesting information about the island of Ireland and typical island products in the Irish Shop.

If the car radio is set to the local radio station Raidió na Gaeltachta while driving in Ireland, Gaelic music will be played. The Irish language television station TG4 also broadcasts all programs in Gaelic. Although Gaelic is still the first official language in Ireland, the Celtic dialect is spoken as the first language by only three percent of the population, while English is much more common as the second official language. Irish is spoken as a colloquial language mainly in the western regions of Ireland. Like all Irish dialects, Gaelic is not always easy to understand. In addition, the Irish usually speak very quickly and do not make it easy for visitors to follow them. There is a large selection of Irish specialties and products from the island in the Irish Shop.

The Gaelic language of Ireland was originally spoken by the Celts. Gaelic is somewhat similar to Scottish Gaelic and the Manx dialect spoken on the Isle of Man. Various Gaelic languages ​​are summarized under the term "Island Celtic". The language spoken in Ireland today evolved from Old Irish. Using the Ogham inscriptions, researchers found that Irish had been spoken as the language of Ireland since the 4th century. The Gaelic language developed steadily until the beginning of the great famine in Ireland in the mid-19th century and was then gradually replaced by English. Many traditional Irish speakers emigrated to America from Ireland or died in the 19th century. Within a few years, Gaelic became a language spoken mainly by the isolated rural lower class population. After Ireland gained independence, many Irish wanted to revive their former mother tongue. This was very important to them as a demarcation from the British Kingdom.

Eamon de Valera was one of the residents who campaigned for a state-sponsored revival of the Irish language in Ireland. However, this project was associated with many difficulties and has not yet been implemented by the Irish government as planned. Many Irish people still dream of a revival of the Gaelic language. The language is now being taught again in schools in Ireland. In 1948, linguists developed a system that precisely defined grammar, spelling, and pronunciation. High Irish has been recognized as an official language in the EU since 2007. As a mother tongue, Gaelic still only exists in dialect form. There is no nationally standardized form of the language in Ireland. After all, 40.8 percent of the population currently state that they are learning Gaelic.

However, different dialects are spoken in the different regions of the country such as Ulster, Connacht and Munster. In addition, each of the three dialects is divided into sub-dialects, which are mainly geographic. Gaelic is a language that is mostly spoken in the Western Ireland region. The state "compulsory education" and the many perks for Irish speakers do nothing to change that. In theory, Gaelic is a compulsory subject in Irish schools, but all of the lessons are in English. Only in special schools such as the "Gaelscoileanna" (Gaelic schools) is the Gaelic language used in all subjects in the classroom.

However, all students in Ireland have the option of being automatically rewarded with a better grade in the form of a higher score for taking an exam in Irish. This means that even less talented students can influence the numerus clausus in their favor. However, the pronunciation of Gaelic is not easy and not easy to explain in writing. Interesting and worth knowing information about Ireland and the Irish language can be found in the Irish Shop and in the dictionaries, which are currently only available in Gaelic-English and vice versa.

The Gaelic language in Ireland

One of the very special characteristics of the Irish is their language. Gaelic not only looks exotic, it also sounds distinctly different, melodic, strange to our ears - and mostly rather incomprehensible. The many "ch" s and the rolling "r" s are responsible for this. And it is because there are only 13 consonants in Gaelic and, as an almost logical sequence, vowels are often combined with one another. That then gives words like Gaeilige - the word for Irish Gaelic. And Ireland is the country where it can happen to the guest to find an M for the woman at the door to the toilets and an F for the man - because Gaelic writes these terms with these first letters. Ireland is exceptional in every way. If you want an impression: "Ma 'se do thoil e" means please, and "Tapadh leibh" means thank you. If that leaves you a little perplexed, the best thing to do is to say: "Chan eil mi 'tuigsinn" - that means: I don't understand ...

However, there are not so many areas on the Emerald Isle where Irish is actually spoken as the main language. These areas have their own name and are called the Gaeltacht. Only a small percentage of the Irish population would still consider themselves Irish-speaking. These areas are remote from the major urban centers and are widely scattered across the island. There are various reasons for the fact that the Irish language was almost completely lost. History has often shaken the country very much and the people barely had enough to live on. Anyone who wanted to go to the city or even emigrate should be able to speak English, the Irish language had a reputation for symbolizing everything rural and definitely not symbolizing progress. This has only changed recently and the Irish have become more aware of their own language and culture. Since then, Irish has been cultivated again and even taught in schools and kindergartens.

According to the constitution, Irish has been an official language in Ireland and in the EU, Irish has been one of the 23 official languages ​​since 2007. But it's not that simple with the language in Ireland. Signs, for example, are often labeled twice, namely in English and in Irish. If you would like to learn it or at least want to enjoy the sound, you can do this very easily. It's best to sit in a pub in the evening and just listen. You may even find that what you initially thought was Gaelic is actually English. Because, as in so many areas, the language has adapted to the region and that also applies to Ireland. The Irish influence in English has become unmistakable, both in terms of terms and grammar. If just listening is not enough, a language course is recommended. Ideally, of course, combined with a vacation on the Emerald Isle. Perhaps you will find the right accommodation on our holiday home page? Just take a look around and look forward to Ireland and its beautiful old language, which is just being rediscovered.