How many people are hoarders

Toilet paper: The hamsters are on the move again

The corona pandemic is driving up sales of hygiene products in Germany. The sales figures for toilet paper in the week from October 12 to 17 were almost twice as high (plus 89.9 percent) than the average of the pre-crisis months August 2019 to January 2020, as a special evaluation published on Thursday by the Federal Statistical Office shows. Sales of disinfectants grew by almost three quarters (plus 72.5 percent) and that of soap by almost two thirds (plus 62.3 percent). "The demand for disinfectants and soap remained slightly above average even during the summer, when sales of food had largely normalized," it said.

According to the findings of statisticians, the demand for flour (plus 28.4 percent) and yeast (plus 34.8 percent) also increased significantly again. Politicians and retailers assure again and again that the supply situation with goods for daily needs is secured and appeal to consumers to refrain from "hamster purchases". Large retail chains have not yet seen a renewed wave of such inventory purchases as in the spring, as a survey by the German press agency showed earlier this week. So far, there has only been an isolated increase in demand for certain products.

"There is enough for everyone"

Even the German food trade, regardless of the sharply increasing demand for goods such as rice and flour, has not seen any hamster purchases as it did during the first Corona wave in March. "We are still not observing any widespread change in the purchasing behavior of customers," said the spokesman for the Federal Association of the German Grocery Trade (BVLH), Christian Böttcher, on Thursday for the Reuters news agency.

"In general, the demand in the grocery stores reflects the stocking of normal needs as before." Occasionally, there is a higher demand in some regions and for some product groups such as hygiene articles. But it is easily absorbed by the supply chains, and it is always replenished. "From our point of view, there is no reason to build up additional supplies in the future either," said Böttcher. "The supply of goods is stable. There are enough stocks." An important basic rule should always be heeded when shopping for groceries, said the spokesman: "If everyone only buys what he needs, there is enough for everyone".

At the beginning of the corona pandemic in March and April, shelves were empty in individual supermarkets, and customers were increasingly turning to hygiene items such as toilet paper as well as canned food, pasta and flour. Many shops therefore only allowed the purchase of normal household quantities. "Politics and business associations meanwhile see the supply situation with everyday goods as secure and appeal to the population to refrain from 'buying hamsters'," the statistical office now emphasized. 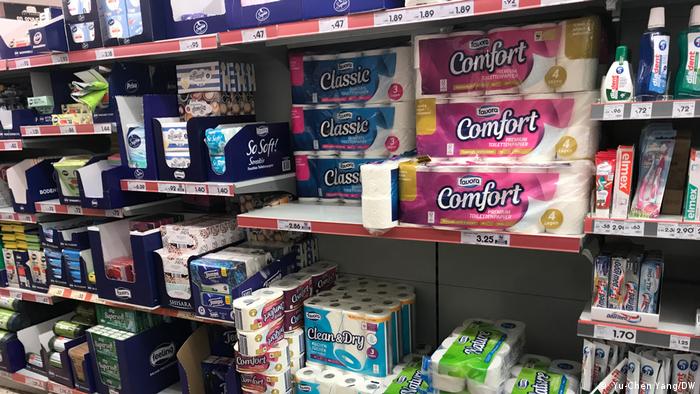 Hamster purchases? Apparently an isolated phenomenon at the moment. This picture was taken on October 19th in a supermarket in Bonn

The massive increase in the number of new corona infections is depressing the consumer mood: the market research institute GfK forecast a value of minus 3.1 points for November on Thursday, 1.4 points less than in October. Both economic and income expectations and the propensity to buy declined. According to GfK, whether the consumer climate stabilizes again in the coming months depends above all on the further course of the pandemic.

"The rapidly increasing numbers of infections lead to tightening of pandemic-related restrictions. In addition, the fear of a further lockdown increases if the infection situation gets out of control in the coming winter months," explained Rolf Bürkl, GfK consumer expert, about the forecast. "The partly strong recovery of the mood from early summer of this year has come to a standstill and is causing the consumer climate to slide again." An increasing propensity to save in October also contributed to this.