What jobs can inmates do in prison?

Fact 3
Work and wages in prison
Forced Labor in Germany? Why, surely.
Forced labor is permitted in the event of a court-ordered deprivation of liberty.
Is the hourly wage of prisoners in Berlin depending on the pay level. 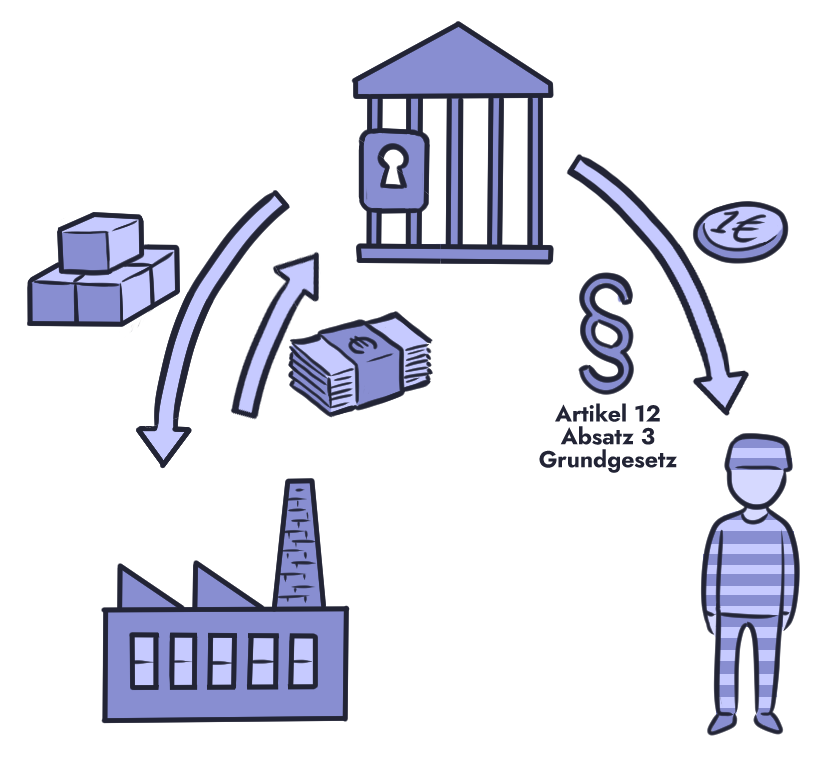 Duty to work for prisoners in Germany

Article 12 of the German Basic Law states that forced labor is permissible in the event of a prison sentence. According to Section 41 of the Federal Prison Act, prisoners are obliged to carry out assigned work that corresponds to their physical abilities. With the exception of Rhineland-Palatinate and Brandenburg, this applies in all federal states and is anchored in their penal law. This duty to work is intended to serve the rehabilitation goal of prison sentences. By promoting willingness to perform, testing conflict and communication skills, improving qualifications and developing self-confidence based on one's own performance, the professional and social integration of prisoners is to be supported and promoted.[1]

The statutory minimum wage of currently € 9.35 per hour does not apply to prisoners, as they are not employees in the sense of the regulation and their work is viewed as a rehabilitation measure. Responsible work can be meaningful and stabilizing and increase the chances on the job market after the dismissal.[4] Many of those affected also prefer to work instead of spending their time idly in the cell. Such a low wage as prisoners get, however, is in no case a remuneration commensurate with performance. For the prisoners, this is a negative learning experience: honest work does not pay off.[5] As a justification for forced labor, the argument is often used that it is not wage labor in the classic sense, but employment serves to prepare for a life in freedom that is lawful. But it is obvious that an appreciation through fair wages and an experience of self-efficacy - for example, in that the prisoners manage to pay off debts or support a family outside - could have a far greater effect on rehabilitation.[6]

Demands for customary local tariffs are often countered by stating that work in prison does not result in the same productivity as in the private sector and that the prisoners do not have to pay for board and lodging in prison. The latter objection can be countered by the fact that the penal system brings the state high annual profits. According to the Federal Statistical Office, the prisons' turnover in 2011 was over 150 million euros. In a research, Deutschlandfunk has compiled more than 80 company names that have awarded contracts to prisons in recent years. Corporations such as BMW, Volkswagen or Miele, Brennenstuhl and Edding have goods produced in German penal institutions because of the favorable wage conditions for them.[7]

In addition, no pension payments are made for working prisoners. Although the pension contributions can be made voluntarily, this is cynical given the low wages. Exclusion from the social security system contradicts the principle of approximation, according to which the prisoner's life in the penal system should be brought into line with life in freedom as much as possible. However, prisoners are exposed to a high risk of poverty in old age and dependence on basic social security benefits. This particularly affects those with multiple or long sentences. This endangers the rehabilitation of prisoners as well as the impunity of those released and is therefore not compatible with the reintegration mandate of the prison system.[8]

The low wages also mean that neither maintenance to partners nor compensation to victims can be paid or debts can be paid off. In various studies it was found that a good half of the dismissed people are over-indebted. The average debt is between € 5,000 and € 40,000.[9] Reform concepts from 1976, which provided for the prisoners to be included in the pension insurance, have not yet been implemented. Neither the federal government nor the states show willingness to solve the well-known problem or to bear the costs.[10]

8 : Müller, C. (2017): Your own fault? Analysis of the structural and institutional causes of poverty by the AWO Bundesverband e.V. BAG-S Information Service for Criminal Assistance, Volume 25, Issue 2/2017, pp. 4-5. On-line. https://www.bag-s.de/fileadmin/user_upload/PDF/Infodienst/Infodienst_2-2017_fuer_Homepage.pdf

10 : German Bundestag (2019): Answer of the Federal Government to the minor question from MPs Markus Kurth, Sven Lehmann, Beate Müller-Gemmeke, other MPs and the Alliance 90 / THE GREENS parliamentary group - Printed matter 19/7887 - Inclusion of prisoners and persons in preventive detention in the statutory pension insurance.