RANGE FOOD & DRINK ON THE GO

Amazon instead of crickets at the stove

Northern Ireland: This is how the ancient Celts feasted and lived

Stonehenge in England and the Newgrange Barrow in the Republic of Ireland are pilgrimage sites for the worshipers of Celtic druids. Just under an hour's drive southwest of Belfast, on the other hand, those Celtic fans who are interested in kitchens and cellars in pre-Christian times meet. - Winfried Dulisch visited the art historian Beate Hahn in the Navan Fort. 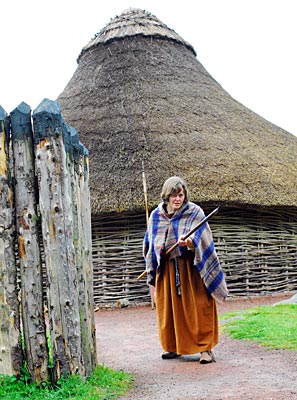 The reception is not friendly. Beate Hahn stands at the gate with her spear and treats every guest like a possible intruder, because "especially with the people from Connaught we residents of Ulster don't understand each other". Connaught is the old English name for the historic province of Connacht, which lies on the Atlantic coast in the west of what is now the Republic of Ireland. The name "Ulster" is still used today for the entire north of the Irish island.

Three of the nine Ulster counties (German: Grafschaften) now belong to the Irish Republic: Donegal in the far northwest on the Irish Atlantic coast and Cavan and Monaghan in the northern interior. The remaining six counties form Northern Ireland, which, together with Scotland, Wales and England, forms part of the United Kingdom, which is ruled from London. But Beate Hahn wants to take us back to the pre-Christian Iron Age, when the green island was ruled by the Celts. 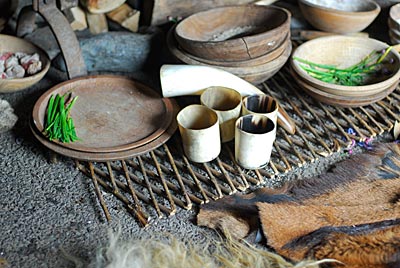 She leads her visitors through Navan Fort, an archaeological site in County Armagh in Northern Ireland. Archaeologists suspect the legendary Emain Macha, which in old Irish legends is called the capital of the Ulster region. Next to a hill, which is considered a Celtic place of worship, the everyday life of Iron Age people comes to life again in a wooden round building.

Beate Hahn: “Americans come here looking for their Celtic-Irish roots. German visitors tend to ask about practical things - for example what material this house was built from. The French are interested in the herbs and spices the Celts used to prepare their food. "

“A farmer lived here,” the Berlin-born art historian begins her tour. “He had 13 cows and was therefore very wealthy.” Just like her 2,000-year-old role model, Beate Hahn makes the cheese for her visitors herself. “I heat water in a saucepan. Then I put in a smaller saucepan with whole or buttermilk, I add a little salt and a few herbs. I'll let it get a little warmer than lukewarm, but not hot. " 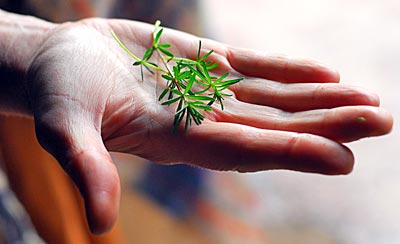 This mixture becomes cheese when the milk component casein curdles. This coagulation process is set in motion by chemicals that are available in every pharmacy. In the wild, Beate Hahn finds the bedstraw that our ancestors also used for cheese production. “I make a brew from this bedstraw. When I add the cooled bedstraw brew to the milk, it curdles. After half an hour I can pour the cream cheese into a cloth and let it drain. "

Celts were not aware of any EU regulations

Can the health department actually know in which food-legal gray area the art historian works? - “My employees and I produce our dairy products with the same care as people did many thousands of years ago. This does not correspond to the EU standards. But it was well received by all visitors who ate our cheese. And we also try our products ourselves before we offer them. "

Whenever Beate Hahn organizes a festival in Navan Fort, she always presents this Celtic specialty: meat in bread. To do this, she seasoned the meat with a pinch of salt, chives and other herbs. The meat is wrapped in a rolled-out bread dough made from flour, water and salt. This package is cooked in a fire pit lined with stones. The meat is slowly cooked from these hot stones and then melts gently on the tongue. 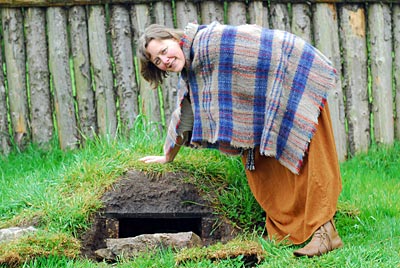 Is the oven warm enough?

Instead of a bread dough, the Celts also liked to have the meat cooked in a coating made of clay. Beate Hahn: “If you prepared a squirrel, a hedgehog or a bird in it, for example, the fur, the feathers or the spines would get stuck in the clay. The meat peeled off by itself. "

In the round hut where Beate Hahn prepares her Celtic specialties, there is only an electric fireplace today. “The smoke from an open fire is far too harmful to the lungs. But our ancestors lived in such smokehouse. With this smoking the meat stocks were also preserved. "

Archaeological excavations have shown: The original ceiling of the round building in which Beate Hahn works was made from hazelnut branches. “Our replica has walls made of hazel branches, the ceiling was woven from willow branches. We made a pragmatic decision - like our ancestors too - for the material available in each case. "

Any holes in the straw insulation had to be repaired by children because adults' fingers are too big. And Beate Hahn also amazes her visitors with other new products: “Many children here realize for the first time that you couldn't always buy milk in plastic bottles. And that the harvest results - and thus the well-being of all people - depend on the weather. And the feeling for the change of the seasons has also been lost today. " 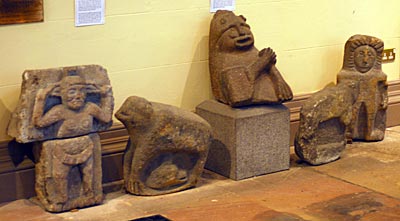 Beate Hahn: “In winter the Celts collected mushrooms and in spring the eggs from wild birds. They only collected the eggs sparingly because they were not allowed to exterminate their food suppliers. They also hunted with spears and slings, they did not know bow and arrow. Their children did not go to school, they had to work - for example, grind barley grains between two stones to make flour. It took a full working day to produce one kilogram of flour. " 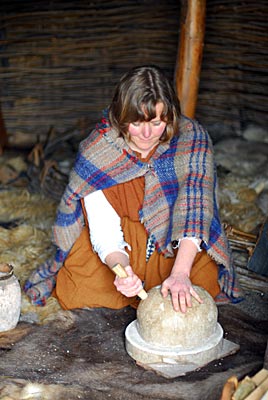 And this product could in no way be compared with our current DIN-standardized flour. - “Stones and other residues in the flour caused bad teeth. Since most people were no more than 35 years old 2000 years ago, they probably did not take it so tragically. They preferred a full stomach and worn teeth to wonderful teeth and an empty stomach. "

Barley and oats were grown in the Ulster region 2,000 years ago. For her bread-baking demonstrations, however, Beate Hahn uses wheat, even though it was once grown only for at least four to five day trips further south. During their travels during the Iron Age, people usually only covered 25 kilometers a day on poorly developed roads. 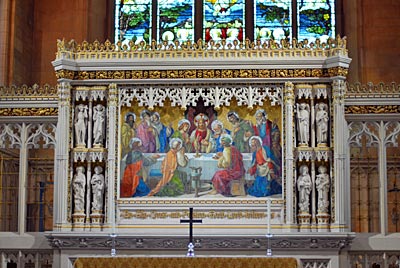 Grain was not only used as food for the Celts, it was also used to make beer. The Romans first brought hops to Ireland, until then barley was simply fermented here. Because the river water was not always clean enough, the Celts living in Ireland drank a thin beer. They brewed a stronger beer for their festivities. Or they drank honey mead, which could contain up to 20 percent alcohol.

What does an amphora of wine cost?

Wine didn't want to thrive in Ireland. But when the Romans conquered the neighboring island and declared it a province of Britain, the Irish Celts traded with them. It was not until the Vikings around 800 that the Celts became fashionable to pay for goods and services with coins. In Roman times, however, the daily rate applied: a slave for an amphora of wine. Beate Hahn: “A small sack of salt was worth more than the daily wage of a farm laborer at the time. Salt made food long-lasting when there were no refrigerators. "

The Irish indigenous people knew various home remedies for alcohol hangovers and other pains. Beate Hahn recommends: “The big chamomile that grows everywhere here was used to make a kind of tea. In addition, our ancestors chewed the bark of willow trees, which today provide us with the raw material for making aspirin. The nettle was a vegetable that was widely available; the Celts used it for infusion drinks or medicinal pastes. "

500 years later, of all people, Christian monks taught the Irish the art of making a decent drink from grain: whiskey. In 1759 Arthur Guinness revolutionized the drinking habits of the Irish once again and started the production of his dark stout in Dublin. Other leisure activities on the Emerald Isle are those sports that are practiced today by the 800,000 members of the Gaelic Athletic Association (GAA). 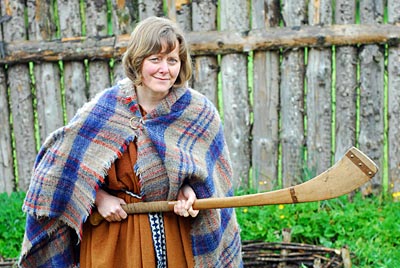 100,000 GAA members play with the hurling bat already used by the Celts, the ball belonging to it was probably made of leather even then. Beate Hahn: "Hurling served the Celts as preparation for the use of a sword, because the movement sequences are very similar." Another piece of sports equipment were the horses, which were hardly expected to be used as a means of transport every day. The Celts used their noble horses as status symbols or for their chariot races and military missions.

equal rights for all

Equal rights prevailed in sport as in armed conflicts. “Women also practiced the use of weapons, because they often had to defend their property and their children against attacks on their own. The Celt was not a cricket at the stove, she was more of an Amazon. ”Equal rights went even further among the Celts. “Women were allowed to use, sell or give away their property according to their own ideas. And both spouses had the right to request a divorce. "

And what experiences did Beate Hahn have as a Celtic housewife? - “The other day I baked bread with nuts outside on the flat, hot stones by the fire. Then the magpies came and pecked the nuts out of the dough. Of course, I was annoyed about it at first, but then I thought to myself: This is how a symbiotic coexistence of humans and animals works. It's a give and take. " 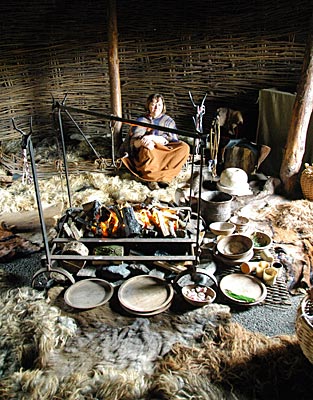 Search at black and white