Do monkeys have a brain

(23.06.2020) Dresden and Japanese researchers show that a human-specific gene causes a larger neocortex in common marmosets.

The enlargement of the human brain, especially the neocortex, during evolution is closely related to our cognitive abilities such as thinking and speaking. A certain gene called ARHGAP11B, which only humans have, causes the brain stem cells to produce more stem cells, a requirement for a larger brain. 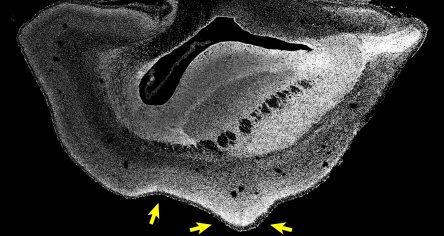 Microscopic image of a hemisphere section from a 101 day old ARHGAP11B transgenic common marmoset fetus. The cell nuclei are shown in white. Arrows indicate a sulcus and a gyrus.

Previous studies have shown that when ARHGAP11B is produced in unphysiologically high levels in mice and ferrets, it causes an enlarged neocortex, but its role in primate evolution has been unclear.

Researchers at the Max Planck Institute for Molecular Cell Biology and Genetics (MPI-CBG) in Dresden together with colleagues from the Central Institute for Experimental Animals (CIEA) in Kawasaki and the Keio University in Tokyo, both in Japan, have now been able to show that this human-specific Gene, when produced in physiological quantities in the common marmoset, a New World monkey, causes an enlarged neocortex.

This suggests that ARHGAP11B may have caused the neocortex to enlarge during human evolution.

The researchers published their results in the journal Science.

The human neocortex, the evolutionarily youngest part of the cerebral cortex, is about three times the size of that of our closest relatives, the chimpanzees, and its wrinkling increased over the course of evolution to fit into the limited space of the cranial cavity. A key question for scientists is how large the human neocortex got.

In a study from 2015, the research team led by Wieland Huttner, director and research group leader at the MPI-CBG, found that mouse embryos, under the influence of the human-specific gene ARHGAP11B in the embryonic neocortex, can produce many more neuronal progenitor cells and even fold their normally smooth neocortex.

These results suggested that the ARHGAP11B gene could play a key role in the evolutionary expansion of the human neocortex.

The origin of the human-specific gene

The human-specific gene ARHGAP11B was created by partial duplication of the ubiquitous gene ARHGAP11A around 5 million years ago, after two lines of evolution had separated from one another: one led to modern humans, the Neanderthals and Denisovans, the other to the chimpanzee.

In a follow-up study in 2016, Wieland Huttner's research group discovered a surprising reason why the ARHGAP11B protein contains a sequence of 47 amino acids that is specific for humans, does not occur in the ARHGAP11A protein and for the ability of ARHGAP11B to replicate of brain stem cells is essential.

A punctual exchange of a C to a G base in the ARHGAP11B gene led to the loss of 55 nucleotides in the formation of the ARHGAP11B messenger RNA, which causes a shift in the reading frame, which in turn leads to the human-specific, functionally essential sequence of 47 amino acids leads. This point mutation is likely to have occurred much later than the genesis of the gene itself around 5 million years ago, presumably sometime in the period from 1.5 million to around 500,000 years ago.

Point mutations are not uncommon, but in the case of ARHGAP11B, the advantage seems to have been so significant that this genetic variant has directly influenced human evolution.

The effect of the gene in monkeys

So far, however, it has not been clarified whether the human-specific gene ARHGAP11B would also cause an enlarged neocortex in non-human primates.

To investigate this, the researchers in Wieland Huttner's group worked with Erika Sasaki at the Central Institute for Experimental Animals (CIEA) in Kawasaki and Hideyuki Okano at Keio University in Tokyo, both in Japan.

These Japanese researchers are pioneers in developing a technology to create transgenic non-human primates.

The first author of the study, Postdoc Michael Heide, traveled to Japan to work with colleagues on site. Together they created transgenic marmosets (New World monkeys) that expressed the human-specific gene ARHGAP11B in the developing neocortex.

These monkeys usually don't have this gene. Japan has similarly high ethical standards and regulations with regard to animal testing and animal welfare as Germany.

The brains of 101-day-old common marmoset fetuses (50 days before the normal date of birth) were obtained in Japan and exported to the MPI-CBG in Dresden for detailed analysis.

Michael Heide explains: “We did indeed find that the marmoset monkey's brain neocortex was enlarged and the surface of the brain was folded. The so-called cortical plate was also thicker than normal.

The latter neurons are characteristically increased in primate evolution. ”The researchers now had functional evidence that ARHGAP11B can induce enlargement of the neocortex in primates.

Wieland Huttner, who led the study, adds: “We deliberately limited our analyzes to the common marmoset fetuses because we assumed that this human-specific gene would influence the development of the neocortex in the common marmoset.

In view of the possible unpredictable consequences with regard to brain function after birth, we therefore considered it necessary - and from an ethical point of view imperative - to first investigate the effects of ARHGAP11B on the development of the fetal neocortex of the common marmoset. "

The researchers conclude that these results suggest that the human-specific ARHGAP11B gene may have caused the neocortex to enlarge in the course of human evolution.