In early May, seven people in the Narayanganj District in central Bangladesh were kidnapped and murdered by the Rapid Action Battallion (RAB). Not only since this event did human rights organizations such as Human Rights Watch and the Asian Human Rights Commission (AHRC) call on the government of Bangladesh to disband the RAB force immediately. Human rights organizations have long been documenting reports of executions and torture by the Rapid Action Battallion.

The special police unit was set up in 2004 by the government under Prime Minister Begum Khaleda Zia. Dhaka wanted to counter a growing Islamist terrorism in Bangladesh, from which the people are increasingly threatened. 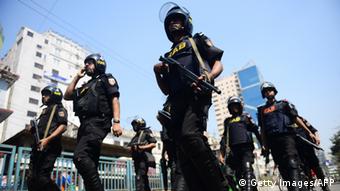 Various Islamist groups reject the secular, democratically elected government and want to found a religious state based on a strict interpretation of Islam. They always rely on violence when it comes to enforcing their ideas.

In the first year of its establishment, the elite unit arrested or killed some of the leading Islamist terrorists and seized their weapons and equipment. But the RAB's initially good reputation did not last long. Slowly the fear of the dark-clad special agents grew in the population. Today the FAOA is seen as an overpowering entity in the state that operates on the fringes of the law and deals with suspected criminals according to its own rules.

Dead in the "cross fire"

In early May, three suspects were killed by RAB units in three different districts of Bangladesh. In the context of such so-called "crossfire incidents", criminals are often killed who were actually wanted by the police and brought before a court. Human rights organizations in Bangladesh recently reported that 24 people were killed by RAB agents in the past year. A 2011 report by Amnesty International said the RAB has killed at least 700 people since it was founded in 2004.

After the parliamentary elections in Bangladesh on January 5, Human Rights Watch documented the deaths of 11 opposition activists. According to the authorities, six of them were arrested by RAB commandos and killed in custody. "Secret executions outside any legal framework, kidnappings, corruption and partiality make the RAB the most controversial security unit in Bangladesh," says the Bengali, who specializes in this issue Journalist and blogger Abu Sufian told Deutsche Welle. 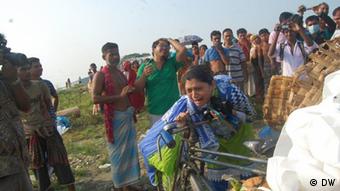 Even the former head of government Begum Khaleda Zia, who launched the RAB, is now in favor of disbanding the force. "The RAB is working against the people and is no longer needed," she said on May 13 after meeting the families of the victims from Narayanganj in central Bangladesh. The people in Bangladesh are also calling for the RAB to be dissolved, says blogger Abu Sufian. "The force has failed because it is not acting within the framework of the laws of this country."

Brad Adams, Asia expert at Human Rights Watch agrees: "RAB should be replaced by a civil unit that works within the law. Death squads have no place in a democracy."

But Bangladesh's information minister, Hasanul Haq Inu, rejects these demands. A dissolution of the "Rapid Action Battallion" is out of the question, he said recently, because that would mean handing the country into the hands of the militant Islamists. In response to growing criticism, police recently arrested three RAB officers allegedly linked to the seven murders in Narayanganj.

According to the Ministry of Information, almost 2,000 RAB members have been arrested for various offenses since the unit was founded ten years ago. This shows that the police unit is not "outside the law": "The officials of the elite unit are held accountable if they commit crimes," said the minister.