What is the traditional Swedish breakfast

The history of Swedish cuisine

Although Swedish cuisine is not as well known as those from other European countries, Swedish dishes are definitely more diverse than just Köttbullar, Herring or crispbread. While the Vikings (800-1050 AD) made their raids across Europe as far as the southern Mediterranean, various dishes were brought back to Scandinavian regions and integrated. In northern Sweden traditional meat dishes were like reindeer and consumed other game. Some dishes have their roots in the culture of the seeds, while fresh vegetables played a greater role in the south. Many traditional dishes use simple, contrasting flavors, such as the well-known, traditional meatballs and the brown cream sauce with tart, spicy cranberry jam.

The early Swedes preserved foods such as meat, fish, fruits and vegetables to prepare for long, cold winters. Due to the geographical extent of the country, there are regional differences between the cuisine of northern and southern Sweden. The climate and location are largely responsible for the development of the kitchen. In the north z. B. Pitepalt (a potato dumpling filled with pork) popular, in the southern region the Pytt i Panna is preferred - a fried dish made from diced potatoes, eggs, meat or ham. The favorite dish on the east coast is Stromming - a small, silvery Baltic herring. Nowhere in Sweden is a meal complete without limpa, a bread of rye. Traditional Swedish dishes are known as husmanskost (home cooking). This is an example of traditional husman's diet Smörgåsbord - a selection of different dishes in buffet form. Smörgåsbord literally means “bread and butter table”. It mostly includes herring, smoked eel, roast beef, jellied fish, boiled potatoes, and lingonsylt (cranberry jam). You can also find Janssons Frestelse (Janssons Temptation) - a layered potato cream dish with onions and anchovies - and of course the Swedish Köttbullar. Another example of Husman's fare is raggmunk - potato pancakes made from flour and eggs, seasoned with onions and garlic, and served with thick pieces of bacon and cranberry jam. The term “SOS” on a Swedish menu stands for butter (smör), cheese (east) and herring (sill). Unsurprisingly, the Swede generally likes all kinds of seafood - especially salmon, which is usually smoked, marinated or cured with dill and salt. Crabs and eels are also very popular. Swedish cuisine offers countless methods for preparing fish. Most locals don't usually order pickled herring, preferring Stekt Stromming (fried herring) - a hearty lunch of mustard or horseradish, mashed potatoes, cranberries, pickled cucumbers or red onions and dill.

A famous dish should of course not go unmentioned, Surstromming. This Swedish specialty is known far beyond the country's borders, mainly because of its strong and intense smell. But what is Surstromming actually? Surstromming used to be the everyday dish of farmers in northern Sweden. Translated, Surstromming means "sour herring". The caught herring is washed out and placed in brine, where it begins to ferment. Less than a month before it is sold, the Surstromming is packed in cans, in which it continues to sit. Many questions arise as to how one eats something that smelly Of course, Surstromming is not simply eaten from the can, but in combination with other ingredients. A typical Surstromming dish consists of boiled potatoes, red onions and butter. Everything is spread over a so-called "Tunnbröd" and then called "Klämma" Either you roll up the bread or eat it in small pieces. 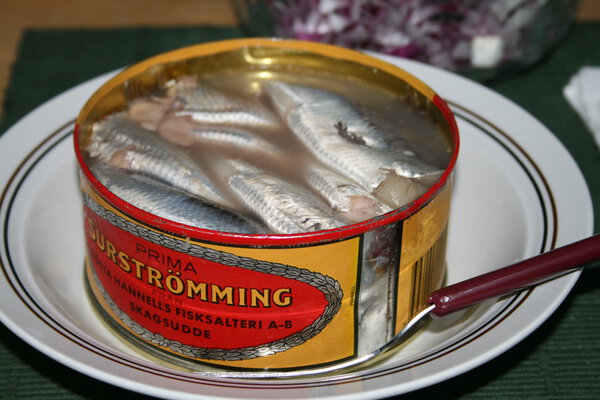 Do you want to enjoy the fabulous Swedish cuisine too? At Schwedenliebe we offer you a fine selection of great ones Holiday homes in southern Sweden at. Whether you want to go on a trip to the Swedish culinary world alone, with your partner or with the whole family including your pet - you will find the right holiday home in Sweden with us.

Discover Swedish cuisine on a vacation home vacation in Sweden!

⮚ Look for a holiday home in Sweden now