Embodiment: How posture affects the psyche

Always seeing and examining mental and cognitive processes in relation to the entire body - we understand this perspective by the term embodiment. It holds the chance to consciously influence feelings or moods through the body. 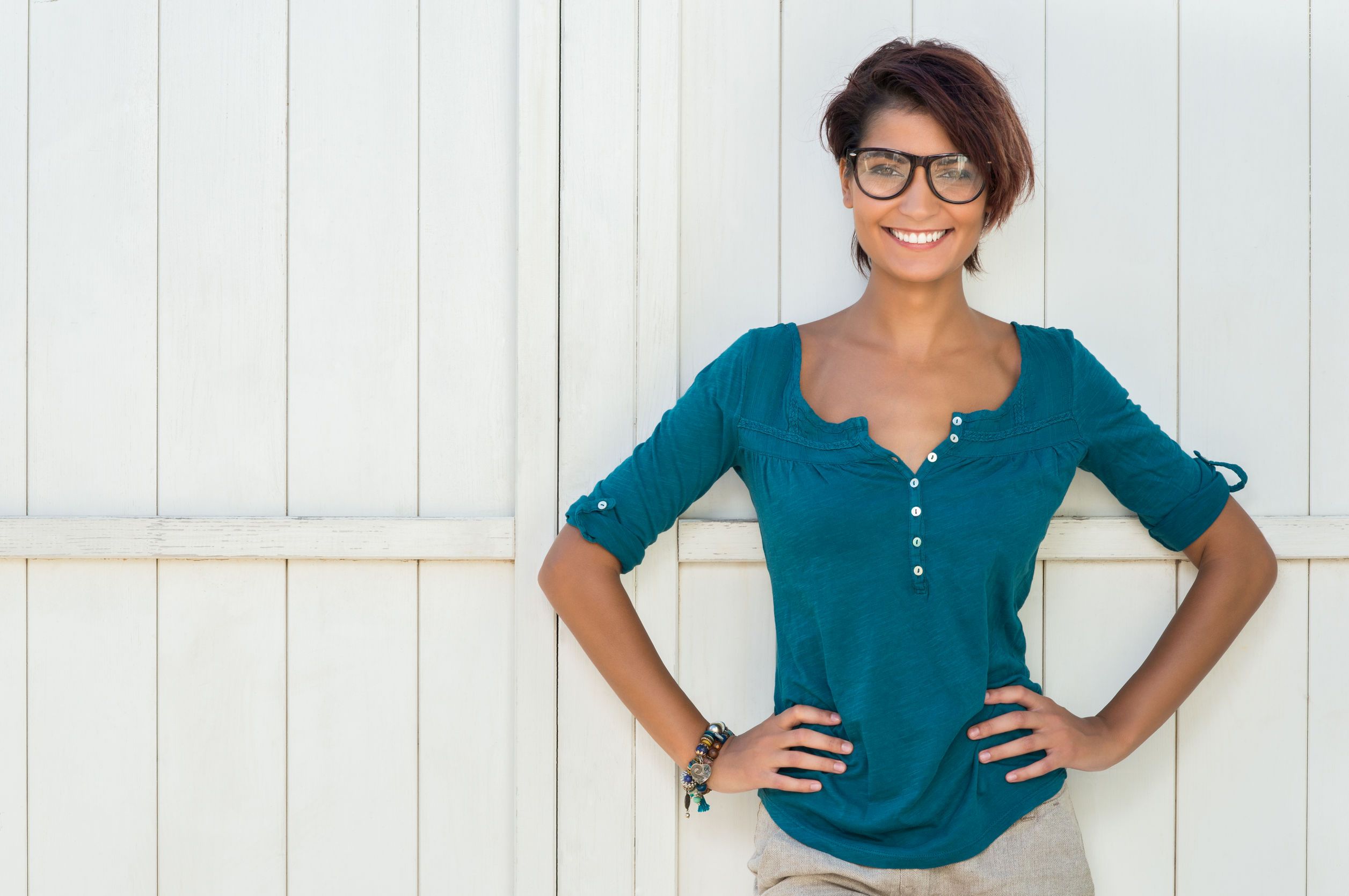 The connection between body and psyche has been a focus of research for years. When people think, feel and act, they do not do so as disembodied beings. The processes of the psychic system are closely related to the processes in the organism. Take the feeling of pride: In a study, scientists analyzed the posture of male high school graduates immediately after they were informed of their final grade. Those with the best grades changed their posture by unconsciously straightening up. Those with the worst grades sagged, while those with grades in the middle showed no change in posture. This shows that psychological experience can be found in the externally visible body events. This is also confirmed by our everyday experiences: the better we know someone, the more precisely we can perceive their posture and movement behavior to see what their psychological state is. The physical reaction is seen as the result of psychological processes.

The body is always involved

We are familiar with the coupling of psychological experience and physical activity: We are annoyed about a colleague who complains verbally about the paper jam in the printer. This increases our tension internally and is visible externally as a frown. The causality is shown here: anger => frown / psyche => body. The embodiment perspective reverses this causality and postulates that it is also possible that one is only annoyed because one enters the office in the morning with a frown. So: frown => anger / body => psyche. In this case, the physical occurrence would be the cause of the psychological experience and not its effect. This process is called body feedback in psychological terminology.

Body feedback can have a massive effect due to the mutual influence that exists between body events and the psychological system. In order to experimentally investigate the relationship between posture and emotion, American psychologists came up with a tricky arrangement. Your test subjects first took part in an investigation into spatial thinking. While waiting for the results, the participants were asked by a second test manager whether they would also take part in an investigation into the connection between muscle activity and skin conductivity. Those who agreed were wired to different electrodes and were asked to remain in a certain posture for eight minutes. Group one sat upright and group two hunched over.

After completing the test, the subjects were sent back to the first test room to carry out a further test on spatial thinking. They were supposed to solve geometric puzzles that were not solvable at all. Because the researchers were actually interested in whether the posture previously adopted had an influence on stamina in a frustrating task. The result was clear: the participants who had sat upright for eight minutes lasted significantly longer than those in a hunched position. At this point we should already be concerned about what bad posture does to our psyche if we spend not just eight minutes but entire office working days in a slumped position at the desk.

In another experiment, social psychologists investigated whether posture can directly influence emotions. The result: The people sitting upright during a fictitious praise were significantly more proud of their good result than the group who received a fictitious praise in a hunched position. If we briefly visualize the people we see every day collapsing and sitting in buses, offices and waiting rooms with an expression of sadness, then we have to ask ourselves: Do they have such a bad posture because they are frustrated and listless, or are they so bad-tempered because do they sit so crooked?

American psychologists also investigated the question of whether body movements can influence attitudes towards a certain issue. Under the pretext of testing the influence of movement on the quality of headphones, one group of students should nod their head while the program is being played, the second group shake their head, and the third group should keep their heads still. The students heard a briefing about the increase in tuition fees, which every student is likely to have a negative attitude towards.

The results of the investigations were astonishing: while the control group, who had kept their heads still, considered the current fees to be appropriate, the majority of the headshakers wanted to lower the fees, while the majority of the noders were willing to accept a significant surcharge on the current tuition fee . This study also shows the strong, unconscious influence of the body on cognition.

Other psychologists asked themselves whether different movement qualities have an influence on the creativity of test subjects. To do this, they had a group of round serpentine lines drawn, resulting in soft, fluid movements; the other group traced angular lines, inducing jerky movements. Then the question was: “What can you do with a newspaper?” The number of answers and their originality were measured. The evaluation of the study found that performing fluid arm movements positively influences creativity and leads to more original ideas.

A well-known study by German social psychologists dealt with manipulation through muscular tension. Under the pretext of finding substitutes for the ability to hold the pen with the dominant hand, subjects were divided into three groups: the first was instructed to hold the pen with the non-dominant hand, the second group to hold the pen with the Lips hold, which induces a pout, and the third group should clamp the pin between the teeth, which purely muscular leads to a laughing face. The task now was to draw lines with the pen, connect dots and underline letters. The last thing they should do was look at different cartoons and then use their pen to tick a funny scale to see how funny they thought they were. The result of the investigation has coined the term facial feedback. Because the test subjects, who had a laughing face during the test, found the cartoons much funnier than the group that had done their tasks with a pout.

Psyche as a mirror of the body

What conclusions can be drawn from these empirical findings? It is well known that the body is the platform for emotional and psychological expression, i.e. the mirror of the soul. But the findings make it clear that the psyche is also the mirror of the body. Embodiment therefore describes a connection between body and mind, in which the processes are always bilateral. Psychological processes always take place in a physical embedding. This understanding also leads to a rethink in cognitive research. For a long time the brain was compared to a computer and mental processes were equated with the abstract processes of information processing. With the embodiment perspective, we see people as a unity of body and mind. Physical and psychological affect one another permanently and are inextricably linked. If you consistently think further about this thought, there will be far-reaching effects on our previous perspectives.

Does this mean that if you put a pencil between your teeth, you can get rid of your bad mood? Or can we boost our battered self-esteem by just walking straight through everyday life? It is not that simple, but the basic finding is that the body has a previously underestimated influence on our well-being and our information processing. But anyone who concludes from this that simply putting on a happy face at the push of a button makes you happy, is rashly transferring a scientific laboratory experiment to complex everyday life. Because a “real” smile and successful emotion regulation require the whole body and not just a single muscle. But even in the most stressful moments it is possible to change the body position and thus have a positive effect on the psyche. Most of the time, negative thoughts cannot be completely stopped, but it is always possible to correct your posture, relax your shoulders and breathe deeply into your stomach a few times. With embodiment theory, we have theoretical support and can ensure strategic use of the full potential of body feedback.

Dare to try it yourself

In order to illustrate the effect of the embodiment on your own body, the following self-experiment is suitable: Let your posture collapse, if you like, you can cross your legs. To do this, pull in your stomach slightly, pull your shoulders up a little, frown and grit your teeth slightly. Remain in this position for a moment. Try to feel good about yourself in this position, optimistic and energetic, creative and happy. This is where the first laughs usually come, because that is simply not possible. The mood does not "fit" with the posture and is therefore difficult to generate.

The next step is the counter-experiment: Put your legs comfortably wide, your feet below your knees, and straighten up comfortably to full height. Let your shoulders relax, breathe deeply into your stomach a few times and then put a smile on your face. In this attitude, try to feel depressed, frustrated, and unmotivated. Here experience shows that the negative mood cannot be created. The attempt is as simple as it is impressive. The massive influence of the body on the mood can be experienced directly here.

Most immediately sense and understand the effect of bad posture on their own mood. Successful self-regulation via the body is therefore a wonderful addition to the psycho-educational (educational) approach of patient programs. A skill is taught that enables successful self and stress management.

The embodiment perspective therefore expands the area of ​​competence in health care towards a more holistic approach. It creates a new, interesting input for everyone to consciously use the body as a means of self-regulation. To know the possibility of doing something good with the right posture and movement not only for your body, but also for your psyche, in a very conscious and concrete way, is definitely worth it. 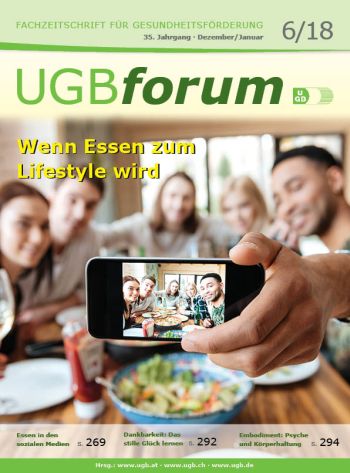 This article was published in:
UGBForum 6/2018
When food becomes a lifestyle