Nicotine consumption among students in the police in Baden-Württemberg

Results of a survey on nicotine consumption among 411 police officers are presented in connection with addiction-specific factors. Furthermore, applied methods of combating addiction by individual smokers are investigated. In addition, support for smoking cessation is given by departments in the state of Baden-Württemberg and other institutions.

"Smoking kills a person every six seconds" (Spiegel Online, 2008). In Germany, between 110,000 and 140,000 people die every year as a result of tobacco consumption (Deutsche Hauptstelle für Suchtfragen, 2010). As a result, more people die from smoking than from the effects of AIDS, alcohol, illegal drugs, traffic accidents, murders or suicides (Federal Center for Health Education, 2011).

In Germany, around a third of adult men and a quarter of adult women smoke (Lampert & List, 2011). If you reflect these figures on the police in the state of Baden-Württemberg, there are over 8,000 tobacco consumers among the police officers. If one were to formulate this hypothesis more strictly, there would be several thousand drug-addicted police officers in the country.

The term nicotine addiction refers to the dangerous tobacco consumption, which is characterized by tolerance, withdrawal symptoms and uncontrolled use (Peterson, Vander Weg & Jaén, 2011). Much of everyone Smoker is aware that the consumption of tobacco products causes and exacerbates various physical ailments. Nevertheless, the number of smokers is only slightly decreasing (Lampert et al., 2011). Physical, psychological and behavioral factors jointly influence tobacco use and its dependence (Peterson et al., 2011).

It should be remembered that all tobacco products are legal drugs that can be obtained by any smoker over the age of 18. Furthermore, tobacco consumption has been tolerated and accepted in our society for centuries. Representative studies have shown that the first contact with the cigarette takes place between the ages of 12 and 13 years (Federal Center for Health Education, 2011). This is often a long time before the youngsters begin to discover themselves. In addition, smokers are increasingly in disagreement with their own smoking behavior and can hardly get rid of their addictive behavior even without professional support. For this reason, doctors and professionals in the health system are called upon to contribute to improving physical and psychological health aspects in order to promote health and extend a person's life (Peterson et al., 2011).
If only the proven risks and consequences of tobacco consumption as well as the problems of passive smoking and effects in pregnancies are taken into account, a need for action in this area is essential.

Since the social acceptance of public smoking is declining nowadays, the risk of imitation, external impact and role model function of police officers play an increasingly important role.
With the help of this bachelor thesis, smokers can inform themselves about comprehensibly designed and neutrally applied instruments for prevention and addiction control. In addition to the analysis and reflection of literary research results and medical knowledge, a survey is carried out at the University of Police of the State of Baden-Württemberg in Villingen-Schwenningen as part of this work. All first-year students in the 32nd year of study are asked about their use of tobacco in order to determine the current state of information.

Study at the Police College

An entire year of study at the Police University in Villingen-Schwenningen with a total of 411 students was selected as a random sample, consisting of two groups of people: On the one hand, the so-called “Aufstiegsbeamten”, who had successfully completed training in the “middle police service” and are already active were in police service. The second group of people were the so-called “direct entrants”. These were mainly high school graduates or newcomers who had previously worked in other areas or were reorienting themselves professionally.

The written survey was chosen to collect the data. The participants could not only give free information, but were bound to a corresponding grid (Institute for Science and Technology Research, 2005). Since a recognized test for examining nicotine addiction with quality criteria already exists in science, this was taken into account and incorporated into the survey.

The so-called “Fagerström test for nicotine addiction” (FTNA) is used to assess the severity of nicotine addiction and specifies addiction criteria. The FTNA is an internationally widespread instrument and has been established in many treatment studies. Out of the total of 411 students, results were obtained from 340 students. The 340 participants were between 19 and 40 years old. The mean value calculated from this is M = 25.87 years (standard deviation SD = ± 4.98). 207 men and 133 women took part in the survey.

Results of the study

24.5% smoke (of which 13.5% smoke heavily and 11% smoke occasionally). 16% have stopped smoking and 53.7% of those questioned describe themselves as non-smokers. In addition, 5.9% abstained from the question. In addition, 35.4% of the female respondents, but only 20.1% of the male respondents, said they smoke. There are almost twice as many former smokers among men (21.1%) than among women (10.8%).
The following Figure 1 shows the situations in which people smoke a lot. 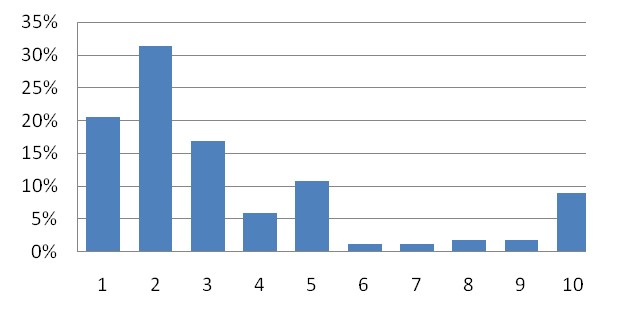 The following situations are listed numerically in the figure on the X-axis. 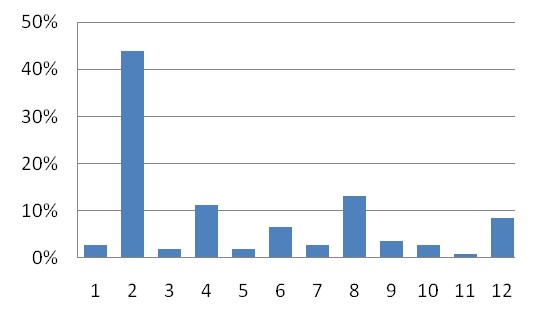 The following methods of the respondents for smoking cessation are listed numerically in the figure on the X-axis.

Of 122 smokers, 48.4% would accept outside help to quit addiction. 73.4% of 214 respondents have absolutely no experience with preventive measures in relation to smoking. 83.6% of 275 respondents do not know the addiction counselor of their service. 69.2% of 286 respondents are informed about a civil servant's duty to maintain health. What the services are doing is shown statistically with the help of Figure 3 below. 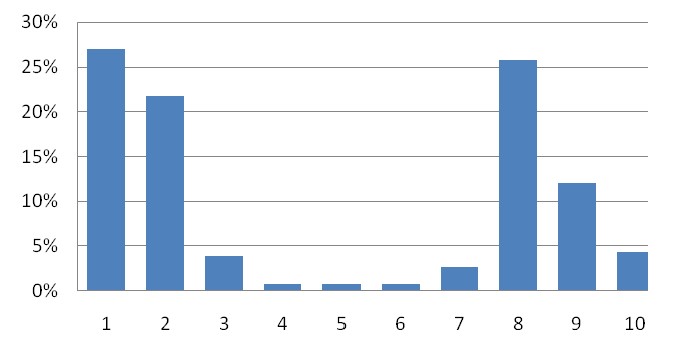 The following measures taken by the agency against smoking are listed numerically in the figure on the X-axis.

The evaluation of the research results shows that the subject of tobacco consumption in the police force is taken seriously by survey participants.
What is striking is the fact that, compared to the average proportion of the German population, there are only half as many male as female smokers among the respondents. In contrast to the opposite sex, men have twice as many former smokers. Accordingly, it is more the men in the police who achieve an exit from addiction. Reasons for this could be that men have a higher potential to withdraw from tobacco addiction.
The evaluation also shows that there are heavy smokers who have never attempted to quit. The most frequent attempts at abstinence, namely up to ten, were made by heavy smokers and former smokers among the participants. This shows that many heavy smokers would like to quit, but cannot do it on their own.
The high proportion of former smokers shows that it is quite possible to quit addiction.
On average, heavy smokers relapse again after almost nine months. The literature states that an addiction memory can last for a long time (Groneberg and Haustein, 2008). The investigation made it known in which situations a particularly high amount of consumption was observed. These are in the order given:

According to the final point method, the participants with the second best chance of success indicate strong will, discipline and cold withdrawal. Reading the relevant guides is also used successfully. Almost half of all smokers would accept outside help. Nevertheless, over 83.6% do not know the addiction counselor in their office. Furthermore, almost three quarters of the respondents have no experience with preventive measures. Over two thirds of the respondents are informed about the principle of the duty to maintain health. The respondents are accordingly poorly informed about the methods that the services are taking against smoking.

Furthermore, some respondents are of the opinion that the services would not do anything about smoking. Finally, it should be mentioned that the measures “smoking ban” and “setting up smoking areas” were mentioned several times. It is also noteworthy that only a few departments enforce a working time deduction for smoking breaks. Preventive programs such as smoking cessation courses, information events, health days and special leave have shown little response.

If the smoker approaches the treatment with the necessary seriousness, the chances of success increase and a permanent exit from the addiction can be achieved (Groneberg et al., 2008).
The following therapies and counseling are common in the treatment of nicotine addiction:

(Groneberg et al., 2008).
Treatments not only include counseling and monitoring of the medication intake, but also recommendations for patient self-help (Peterson et al., 2011).

Service agreement on drug abuse, drug addiction and help for addicts in the Baden-Württemberg police

This service agreement, or DV Sucht for short, is one of the most important instruments used to combat addiction within the police force. However, this is mainly geared towards alcohol addicts, although it also includes other legal and substance-related addictions.

From the results of the study among the first-year students it can be concluded that many want to evade addiction, do so and develop a strong awareness to quit smoking. Male smokers find it easier than female smokers. In addition, it was learned that countless smokers would generally accept preventive help. It can be stated that although there are many possibilities and approaches for combating addiction, these are not used enough. This could possibly be due to the fact that many of the officers are insufficiently informed about the existing measures on addiction within the police. In order to improve the structure of prevention and education, police doctors, addiction helpers and addiction counseling centers should be trained accordingly and involved in preventive measures against tobacco consumption. Smokers must be educated by all means necessary. For example, information flyers, seminars and targeted lectures are ideal.

Both the health and the economic damage are immense. Therefore, with today's knowledge of all effects, tobacco control is inevitable - preferably also in the police, which is of particular social importance. Smokers must be supported and accompanied by various agencies on their way to quitting smoking.

You can find more information on the topic of "nicotine consumption" including literature sources in the Bachelor thesis Schneider, Manuel. Nicotine use among first-year students in the police. Police College, Villingen-Schwenningen, 2011.
Sources can be requested from the authors.