According to the World Health Organization (WHO), around 3 billion people - 48% of the world population - live in malaria-prone areas. Every year there are around 400-500 million cases of infection with more than a million deaths, especially among children.[1] According to WHO estimates, the number of cases of infection will increase to 750 to 1,100 million by 2050 due to population growth alone.[2]

2 Malaria in Germany and Europe

Malaria was also widespread in Germany and Europe until the 19th century. Even during the so-called "Little Ice Age" in the 16th and 17th centuries, the coldest period in Europe since the Middle Ages, there were malaria epidemics in large parts of Europe. B. also in Scandinavia and Great Britain. In Germany, the spread of malaria reached its peak in the first half of the 19th century. The occurrences were mainly in the coastal area, but also along the Rhine and Danube. In 1826, for example, there was an epidemic in the North Sea with around 10,000 cases of illness and many deaths. With the exception of the Mediterranean region, malaria had largely disappeared in Europe by the end of the 19th century.

The reasons for the extensive eradication of malaria in Europe were not due to climatic changes, which should rather have caused the opposite due to the gradual warming. Rather, the living conditions of the Anopheles mosquitoes were increasingly restricted by human measures. The draining of wetlands, the straightening of rivers and the expansion of sewer systems, which significantly reduced mosquito breeding grounds, played a decisive role. In addition, as a result of migration to the cities or improved living conditions in the countryside, people lived less and less in close contact with farm animals, which many mosquitoes host. In addition, the anopheles mosquitoes were destroyed by the insect control agent DDT from the middle of the 20th century.[3] In this way, from 1900 to 2002, the risk areas were reduced from 53% of the global land surface to 27%.[4]

There was a certain resurgence of malaria in Germany during and immediately after World War II. The war events favored the spread of the malaria pathogens through refugee and troop movements and the breeding conditions of the Anopheles mosquitoes through bomb craters, including destruction of the landscape. Malaria has been considered eradicated in Germany since the mid-1950s. The decisive factor was the use of the insecticide DDT. Occasional cases that have recurred are caused by global tourism and the transport of goods and the accompanying introduction of infected foreign vectors. Since the 1990s, these cases amount to around 1000 cases per year. Malaria is thus the most important import disease in Germany.[5] 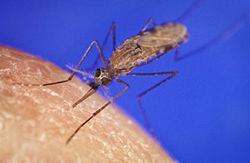 3 Importance of the climate 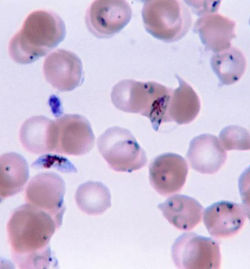 Even if the history of malaria in Europe was mainly shaped by social and ecological factors, the climate is of decisive importance for the spread of malaria worldwide. The reason is the high dependence of both the vectors and the pathogen on climatic factors. The life activities of the Anopheles species are linked on the one hand to certain temperatures, but on the other hand also to sufficient moisture. In most species, development begins at 10 ° C, which reaches its optimum at 25-30 ° C and leads to death from 35 ° C. As the temperature rises, so does the rate of blood digestion, which increases the lancing frequency and increases the risk of infection. On the other hand, higher temperatures are often associated with greater drought, which can lead to dehydration of the mosquitoes and thus worsen their living conditions. However, drought can also lead to the formation of puddles of water, for example as remnants of rivers, which are ideal breeding grounds for Anopheles mosquitoes. And heavy rains, which on the one hand create new breeding grounds, can on the other hand turn stagnant water into rivers that wash away the brood of mosquitoes.

However, there is no simple relationship between climatic factors and the spread of malaria. An estimate of the possible spread of malaria under changed climatic conditions in the future is therefore associated with great uncertainties. The main difficulty lies in the lack of data on the current dependence of malaria pathogens and vectors on climatic factors. In Germany, as in many other countries, this is due not least to the scaling back of research in this area, since malaria was considered to be eradicated. Because the data forms the basis for developing models that project the future spread of malaria, there is limited reliance on their results.

In addition, many model calculations often only consider temperature as an influencing climate factor. If, in addition to the mean temperature, the minimum and maximum temperature, precipitation and humidity are taken into account, which also play an important role in the survival of vector and pathogen, a significant spread of malaria due to climatic changes is unlikely in the temperate zones. In addition, as the history of malaria spread in Europe has shown, climate is likely to play only a secondary role in relation to human actions and activities. Given the current state of the health system, e.g. in the EU, a spread of malaria with global warming is highly unlikely in the long term.[6]

Millions of additional people affected by malaria due to climate change according to various scenarios.

Worldwide, however, the situation can be assessed differently. A global simulation of the population, which will also be exposed to the malaria risk due to climate change until the 2080s, shows a very differentiated picture depending on the climate scenario and region.[1] Scenarios A1Fl and B2 show an increase in the population at risk, which is exposed to the risk of malaria infection for more than three months of the year, by 100 and 31 million people, respectively, while A2 and B1 show a significant decrease of 141 and B1, respectively. 153 million show. The decrease is mainly due to lower rainfall, which is expected e.g. in the Amazon region, Central America and Pakistan. In the poorer regions in particular, which are now relatively exposed to the risk of malaria, climate change will tend to reduce the risk of malaria, as the conditions for the vectors worsen here. On the other hand, there is a higher risk in the highland areas in East Africa, Central Asia and China.

Although the African malaria areas make up less than half of the world's risk areas, approximately 85% of the illnesses and deaths in Africa are currently to be mourned. A study of the future malaria risks in Africa comes to the conclusion that the areas at risk from malaria will only expand by 5-7% by 2100.[1] The enlargement of the risk areas will then mainly take place through an expansion in height (e.g. Ethiopia and Zimbabwe), while the expansion to the north and south, especially in South Africa, is only slight. The increase in the risk population, on the other hand, shows significantly higher values ​​at 16-28%. The reason is, on the one hand, the seasonal increase in the risk of infection in existing risk areas. On the other hand, the areas threatened by malaria in the future are more densely populated than the current malaria areas. And third, the population living there is not immunized against the disease.[7]