What's wrong with Antigua and Barbuda 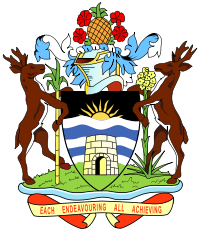 Antigua and Barbuda coat of arms

Antigua was believed to have been around from 2400 BC. Visited by Indians from the Ciboney tribe. Scientists identified this tribe at Jolly Beach for the year 1775 BC. To prove with certainty. From 500 BC They were the first permanent settlers on the North Sound. In the first century AD they were ousted by the Arawak Indians. Around 1200 the Arawaks continued their migration to the northwest, or were displaced by the warlike Carib Indians who followed. The Indian name for Antigua was "Wadadli”.

In November 1493, the densely forested island of Columbus rediscovered but do not enter. He named her after the Blessed Virgin in Seville Cathedral: Santa Maria de la Antigua. The island was only briefly owned by the Spanish and French. In 1520 the Spaniard Don Antonio Serrano stayed on the island for a short time. In 1629 the French Norman Belain d´Esnambuc was also here. In 1632 a group of British settlers came under the leadership of Philip Warner of St. Kitts as the first permanent resident. They grew indigo and tobacco near the village of Old Road. In 1666 the French conquered Antigua, but in 1667 the island was again under English possession in the Treaty of Breda and in the following years it was never again occupied by another nation. In 1674 the Carib Indians attacked the island Dominica for the first time the European settlers. The attacks were repeated over the next eight years and several colonists were killed in the process. 1676 was Phillip Warner elected as speaker in the House of Assembly, the island government. One of his descendants was Charles Warner. This acquired large lands on the island Dominica.

1674 came Sir Christopher Codrington of Barbados to Antigua. He founded the first large plantation, named it "Betty's Hope”, Grew sugar cane and developed a strong slave and plantation economy. He acquired the island of Barbuda from the British Crown in January 1685 in order to plant crops for his slaves to feed them, for fishing and to get enough timber for his plantation. At the same time, his people there robbed all ships that crashed on the reefs of the island. The Codrington family settled in Gloucester in England down, the plantations were only run by administrators.

Between 1640 and 1713 there were six major slave revolts on the island. In 1736 one of the biggest uprisings was nipped in the bud. He was led but betrayed by a Coromantee slave of royal blood from the Ghanaian Gold Coast. The slave "Prince Klaas”And 68 other followers were hanged or burned in St. John's. Prince Klaas is now Antigua and Barbuda's first national hero.

By 1705, most of the fertile land was cultivated with sugar cane, and the last remaining forest was cut down. The consequence was increasing dry times. The Potswork Dam was built to irrigate the plantations and was used to store water. There were 170 sugar mills. The mills originally powered by oxen were replaced by windmills. 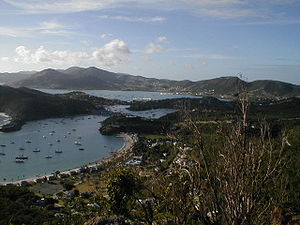 A map from the early 19th century names 161 sugar cane plantations. At the center of each plantation was the manor house, and each had at least one sugar mill. In 1807 the trade in slaves was banned by England and the keeping was allowed to continue for 30 years.

After the abolition of slavery, the plantation owners received £ 415,713 from the Treasury in London for the loss of their slaves. Many of the released slaves followed suit Guyana and after Trinidad because there were better working conditions there. The others settled in 27 newly founded localities in a very short time. Between 1847 and 1852 around 2,500 Portuguese came to replace the island Madeira as a worker to Antigua. It is due to their presence that the Catholic Church was established on the island in 1859. At the beginning of the 20th century, a large group of Lebanese and Syrians came to the island and they have established themselves as traders to this day. After 1890, about 500 people came to the island from China.

At the beginning of the following century the population grew and at the same time the price of sugar fell. In addition to sugar cane, the cultivation of corn and cotton began.

In 1938 the average daily wage was between 28 and 36 cents. This led to strikes, sabotage and excesses by the lawless workers. The Colonial Office in London set up a commission of inquiry, led by Lord Moyne, to look for ways out of the crisis.

During World War II, the island was an important US military base from 1941 onwards. The Americans built several naval bases, later also satellite observation stations as part of the Apollo space program. Some of the facilities are now used by the national coast guard.

The fall in sugar prices brought the industry into extreme trouble between 1950 and 1960. The government had to borrow money repeatedly to buy plantations and to pay the workers in the sugar factory. It was not until 1971 that circumstances forced the industry to close, after which 60% of the agricultural land remained fallow. Since then, the government has been looking for new products for farmers to plant.

In 1940 the first union was formed, the Antigua Trades and Labor Union (AT & LU). One of the men who was there from the start was Vere Cornwall Bird, he was elected union president in 1943. Within three months the union had 3,000 members, in 1956 there were over 12,000; Public service workers, domestic workers, traders, smallholders, shopkeepers and teachers, in 1946 the first five union members were elected to parliament. In 1946 V. C. Bird was elected to the Legislative Council, in 1956 he became a minister, in 1961 he was chief minister. From 1958 to 1962 the island was a member of the West Indian Federation. Independence negotiations with England began in 1965. A second union was not established until 1968, the Antigua Workers Union (AWU). The Progressive Labor Movement (PLM) party, headed by Leonard Tim Hector, emerged from this union.

On November 1, 1981, Antigua & Barbuda became independent, although the sparsely populated island of Barbuda had fought against it until the end. After obtaining full independence, V.C. Bird first prime minister. In 1994 one of his sons, Lester Bird, took this position. The Bird family controls all political life on the island to this day. Not everything has always gone the right way and has earned Antigua the dubious title of “the most corrupt island in the Caribbean”.

After the cultivation of sugar cane ceased in the early 1970s, the main sources of foreign exchange are the West Indies Oil Refinery and tourism. The roots of tourism go back to 1949. Back then, a group of North American millionaires had vacation villas on the Bermuda Island and were looking for new "playgrounds". After extensive research, it was decided to build the Mill Reef Club on Antigua. In addition to a villa complex with a private beach, a golf course with a clubhouse and tennis courts was built. Since this small group was hardly noticed by the island's population, there were no conflicts. On the contrary, the super-rich Paul Mellon from Exxon Oil provided large amounts of money with which the Holberton Hospital was built on the one hand, and some school leavers who were eligible for funding received a scholarship in the USA on the other.

After Fidel Castro took power Cuba took over and the Americans imposed a blockade on the island, many North Americans were looking for a new holiday destination. Today tourism accounts for approx. 80% of the national income, 35% of all employees work directly in this industry. One of the largest hotel complexes was planned and built by Alfred Erhart: Jolly Harbor Beach Resort. On 200 hectares of waterfront villas, a hotel, a marina with 140 berths, a shopping center, helicopter landing pad and a golf course were built.

With the ship [edit]

The port of St. John's is regularly called by cruise ships. During the cruise season, outside of the hurricane times, i.e. in the months of November to May, up to three large cruise ships can moor. For example, in November 2011 the "Queen Elizabeth" was in Antigua.

The islands are only very slightly affected by the corona-related pandemic.

The Federal Foreign Office provides current information on travel regulations during the pandemic on its website and the government on a website specially created for Cov-19.

Bus transport There is no regular service with fixed departure times. But now there are fixed routes and stops. In addition, private entrepreneurs drive from St. John's to the various villages from 6:00 am until dark.

English is the official language spoken and written on the islands, so with a good knowledge of English it is relatively easy to find your way around. Due to the Caribbean dialect, which can be particularly noticeable in pronunciation, the usual knowledge of English may not be sufficient, so that individual words are difficult to understand. Here it helps to draw attention to it and ask for repetition.

The currency is the East Caribean Dollar (EC $), which is linked to the US dollar with a fixed exchange rate. 1 USD equals 2.70 EC $, vice versa 1 EC $ 0.37 USD. US dollars are widely accepted as banknotes.

In the capital St. John's there are two large malls directly at the harbor, mainly built for cruise guests. Another shopping center can be found on the northern outskirts.

In Antigua and Barbuda, meat, fish and seafood as well as cooked vegetables or fruits are standard. Rice is often served as a side dish. The national dish is fungie, which is very similar to Italian polenta and how it is made from cornmeal. Another specialty is the Ducana, a dumpling made from sweet potatoes that is often served with clipfish. Shellfish such as lobsters and the like are also fished from the seas. These can be eaten in many restaurants or hotels.

Due to the lush nature and the tropical climate, tropical fruits are often grown in Antigua and Barbuda and processed in food, such as plantains, fruits / spices from the tamarind tree or sweets from the region's sugar cane such as caramel sweets and cakes.

Tourists run the risk of falling victim to petty crime, especially at popular locations or festivals. Pickpockets and handbag robberies are common offenses. Therefore, important documents and large sums of money should be kept safe.

The Federal Foreign Office provides further useful information on security on its website.

There are practically no dangerous animals on the Caribbean islands. However, a few insects can be quite annoying, including fire ants. Your bites can cause allergic reactions. It is therefore advisable to wear closed shoes when hiking in the rainforest or on farms.

The daytime temperatures are evenly between 24 ° C. in February and 28 ° C. in August and September. Night temperatures are between 18 ° C in December and 21 ° C in summer. The humidity fluctuates around 80%. In May and June there is a small rainy season in the period from mid-August to mid-November it rains heavier.

The tropical cyclone "Luis" swept over the island on September 6th and 7th, 1995 with high wind speeds and left a swath of devastation, especially on the east coast. All hotels and 75% of all houses were more or less badly damaged or destroyed. The damage to nature healed itself within a few weeks due to the tropical climate. The material damage of US $ 500 million to the buildings was mostly repaired within 6 months.

In September 1998, hurricane “Georges” swept over the island at a speed of 175 km / h. Roofs were covered, trees uprooted and streets flooded. People were not harmed as several thousand spent the night in shelters.

The island's population is extremely friendly, helpful and reserved.

Long distance calls from public payphones can be paid for by credit card. For the German announcement, "353" must be dialed. Card phones have been installed all over the island since 1989. Telephone cards for 10, 20 and 60 EC $ are available from Cable & Wireless, the Tourist Board, in hotels and occasionally in shops.