What is foreign currency debt

What does a US dollar devaluation mean for ECB monetary policy?

In the literature, a flexible exchange rate and capital controls are seen as important to independent monetary policy. A fixed exchange rate, on the other hand, reduces the autonomy of one's own monetary policy, as it has to adapt to the monetary policy of another country in order to secure the exchange rate. Free capital movements limit monetary policy independence, since interest rate rises abroad lead to capital outflows and thus require a monetary counter-reaction at home - especially if the exchange rate is to maintain a certain level. Emerging countries with high US dollar indebtedness often find themselves in the dilemma that they have to react to a devaluation of their currency as a result of capital outflows with interest rate increases in order to support banks or companies with high foreign currency indebtedness. During the South American sovereign debt crisis, the appreciation of the US dollar due to high double-digit US interest rates caused exactly this, in Turkey, however, domestic political problems have currently led to a currency collapse. In both cases, the central bank's autonomy was significantly reduced. The globalization of balance sheets and national debt can reduce the autonomy of monetary policy or increase the systematic risk of countries. 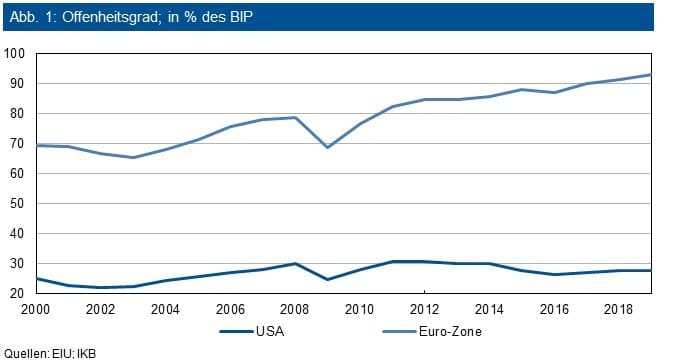 In view of the flexible exchange rate, the good credit rating and relatively low foreign currency debt, the monetary policy of the euro zone should be relatively autonomous. A significant depreciation of the euro should therefore not force the ECB to raise interest rates, since balance sheet problems are negligible due to the low level of foreign currency debt. The high and increasing degree of openness in the euro zone, on the other hand, may strengthen the importance of the euro exchange rate with regard to the local inflation process and the price competitiveness of the real economy. In addition, the financial crisis seems to have increased the importance of the exchange rate for monetary policy. Because even if the monetary policy of many central banks has shown in recent years that the 0% interest rate does not stop there, there is much to suggest that the central banks' ability to influence or act in an environment of negative interest rates is significantly reduced - also because persistently negative interest rates can have undesirable side effects. It is true that low interest rates ensure the debt sustainability of a country or state. However, this does not necessarily result in stimulation of the real economy. Even after years of negative interest rate policy and the expansion of the ECB's balance sheet, lending in the euro zone remains rather restrained and shows no significant stimulus from low interest rates. A further interest rate cut or balance sheet expansion will therefore only have a manageable impact on the inflow of liquidity into the real economy and thus also on the classic inflation process - even if it is absolutely necessary for debt sustainability, long-term redistribution between debtors and the wealthy and an effective increase in demand remains. In this environment and above all because of the high degree of openness of the national economies, the euro exchange rate is an important factor influencing the generation of impulses for the real economy and the inflation process. However, a devaluation will only lead to a sustained rise in inflation in combination with a sufficient expansion of the money supply. In other words, an appreciation of the euro can negatively affect inflation dynamics in the medium term given the currently rather insufficient expansion of the money supply and the lack of monetary policy influence and thus increase the pressure on the ECB to act.

The risk of US dollar devaluation is not trivial

It is true that the G20 countries have agreed not to deliberately devalue currencies in order to stimulate the economy. Nevertheless, there is a risk of exchange rate movements as a result of changes in monetary policy, especially in the USA; Because in the next 12 to 18 months a rate cut and thus a turnaround in US monetary policy is assumed rather than sustained US interest rate hikes, because the US economy showed GDP growth in 2018, not least due to tax stimuli this level is not tenable. This is also shown by the US sentiment indicators, which, based on the current high levels, will tend to decline in perspective. In addition, the US trade imbalance remains a dominant issue in US foreign and economic policy. While tariffs are unlikely to significantly reduce the current account deficit, a significant depreciation of the US dollar can be quite successful here (see IKB Capital Market News November 13, 2018). In the US election year 2020, the Fed and US economic policy could put increased pressure on the US dollar because the US exchange rate is generally at an elevated and overvalued level. The price-adjusted and weighted exchange rate is currently around 14% above the average level of the last 30 years. There is thus much to suggest that the US dollar could come under increasing pressure. However, the long-term interest rate differential between the US and the euro zone remains relatively large, which in turn should support the greenback. The decisive factor will therefore be whether the Fed feels compelled to cut interest rates in 2019 or 2020. 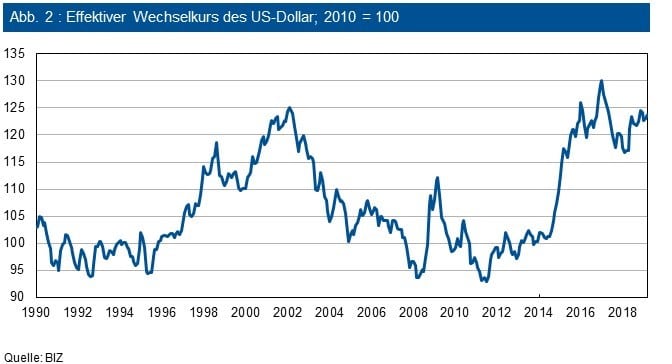 Simulation result: appreciation of the euro would prevent a move away from negative interest rates 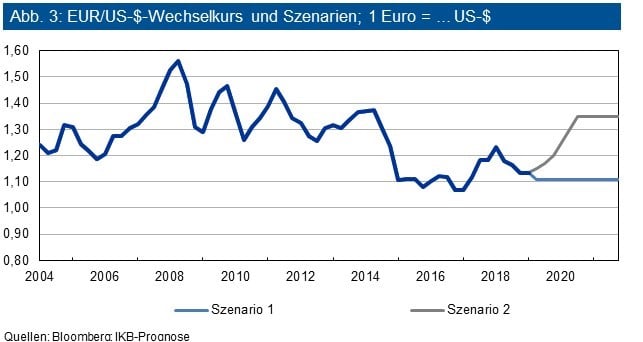 As expected, the appreciation of the euro leads to lower import prices and thus also to a lower inflation rate. In 2020 and 2021, inflation for the euro zone would be between 0.3 and 0.4 percentage points lower than in the scenario without an appreciation. However, these simulation results ignore the negative real economic impact of lower exports and higher imports. An inflation rate that is around 0.5 percentage points lower would therefore not be ruled out. The implications that the dollar devaluation has for inflation dynamics in the euro area are therefore not insignificant. The same applies to the monetary policy of the ECB. Taking into account the Taylor rule, the theoretical key interest rate would have to fall between 0.5 and 0.6 percentage points as a result of the euro appreciation in 2020 and 2021. The risk of a US dollar devaluation to a level of around 1.30 EUR / USD or more is therefore of particular importance for the ECB in terms of monetary policy. If it did occur, it would prevent any rate hikes or a move away from negative rates. This is especially true when real economic implications are considered; because a US dollar devaluation would probably be the result of a cooling US economy.

In the event of a possible slowdown in the US economy, a related turnaround in Fed interest rate policy and the ongoing confrontational course in US trade policy, the US dollar is not unlikely to depreciate over the next twelve months.

Even if the flexible exchange rate of the euro should in principle guarantee an autonomous monetary policy, this may not apply in view of the current monetary policy orientation and inflation expectations of the ECB. Simulations by IKB show that an appreciation of the euro against the US dollar would lead to significantly lower inflation in the euro area and would thus prevent the ECB from having room for maneuver to move away from negative interest rates.