Vitiligo is a rare disease

White spot disease (Vitiligo): Formation of white pigment-free spots on the skin (possibly also on the mucous membrane), usually beginning between the ages of 10 and 30. The cause is the destruction of pigment cells (melanocytes), probably caused by autoimmune reactions. The benign but incurable skin disease occurs in families.

When to the doctor

If the Cosmetically disturb skin changes.

In contrast to albinism, in which the pigment deficiency is already congenital, the white spot disease appears later. It is not uncommon for other autoimmune diseases to occur at the same time, e.g. B. circular hair loss, diabetes, underactive adrenal cortex or thyroid disease such as Hashimoto's thyroiditis.

Due to the lack of pigment protection, the discolored areas of the skin are very sensitive to light and at risk of sunburn. The risk of skin cancer is also increased. Depending on the extent, the white spot disease can be cosmetically very disturbing and cause a high level of suffering in the person affected.

Vitiligo can occur anywhere on the body. The hands, feet and groin area as well as parts of the body exposed to the sun such as the face or neck are particularly often affected. If there is hair on the affected part of the body, this also usually turns white. 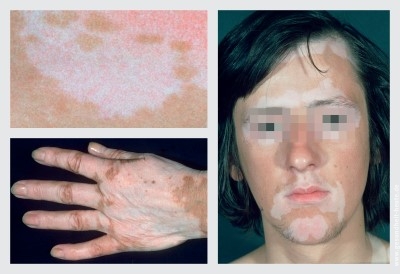 White spot disease in close-up (top left), on the face of a 26-year-old man (right) and on the hand of a 55-year-old woman (bottom left).
Georg Thieme Verlag, Stuttgart

In the common, generalized form (90%), large spots appear on both sides of the body. The spots get bigger and bigger. After all, up to 80% of the body surface can be depigmented. In the rare, local form of Vitiligo (10%), there are only isolated white spots, which usually do not spread any further.

That's what the doctor does

The dermatologist makes the diagnosis based on the discolored patches of skin. To be on the safe side, he can test the blood for autoantibodies and possibly take a skin sample. The white spot disease cannot be cured and the success of the treatment is unfortunately often unsatisfactory.

Irradiation with UVB light, UVA light (Puva therapy) or UVB laser often leads to a local improvement in skin pigmentation. They are supposed to stimulate the formation of melanin. Laser treatments are only suitable for localized vitiligo. In the case of extensive depigmentation, irradiation with a wavelength of 311 nanometers is particularly effective. This wavelength does not cause sunburn, but it does inhibit certain immune cells that may be overactive in Vitiligo. Radiation is usually carried out twice a week for a period of 10-12 weeks.

Ointments with the immunosuppressive active ingredients tacrolimus in Protopic® or pimecrolimusin Elidel® are also showing good results. They are increasingly replacing the previously common cortisone ointments, which usually lead to considerable skin damage with the required treatment duration of 6 to 8 months. Radiation and ointments are also used in combination, as studies suggest that the ointments improve the results of radiation. Vitix® gel helps in problem areas such as the corners of the mouth or eyelids. It contains antioxidant enzymes from melon fruit extract. They should improve the effect of light therapy and stimulate the body's own melanin production.

An effective but complex treatment method is the transplantation of the body's own skin tissue or pigment cells, which are multiplied in the laboratory after removal from healthy skin areas and then applied to the diseased skin areas (previously treated with laser) using an adhesive ointment. The method is only suitable for smaller areas. If more than 60% of the skin area is affected by Vitiligo, the last option is to permanently discolor the remaining skin areas by bleaching. Cryotherapy (cold therapy), a chemical peeling or a chemical bleaching agent are available as bleaching methods. The general disadvantage of bleaching is that even more of the body's own pigment protection is lost.

With self-tanning agents, commercially available or medical make-up (camouflage), the white skin spots can be matched to the natural skin color. You should initially have a beautician show you how to use it. Medical camouflage make-up also protects against UB radiation.

A somewhat more even skin tone can also be achieved by taking capsules with beta-carotene (e.g. in Carotaben® capsules), as the yellowish-brownish substance is deposited in the horny layer of the skin. However, both self-tanners and beta-carotene do not protect against UV radiation. You should always pay attention to good sun protection (SPF 50+), as the discolored areas of the skin have an increased tendency to sunburn and the risk of skin cancer and extreme sunlight can worsen the course of the disease. So that the contrast between the white spots and the rest of the skin does not become even stronger, the pigmented areas of the skin should also be covered with a strong sunscreen.

Important note: This article has been written according to scientific standards and has been checked by medical professionals. The information communicated in this article can in no way replace professional advice in your pharmacy. The content cannot and must not be used to make independent diagnoses or to start therapy.
<?