.Books on Islamic topics can be found in the Eslamica Publishing House.

In Islam, satans are creatures who feel superior to the believers [mumin] and are busy with proving that people do not serve God but serve them.

Satans can exist both among men and among the jinn (cf. Holy Qur'an 6: 112). They try to induce believers to sin by whispering so that they serve idols rather than God (6: 121). But in the end they are powerless against the believers [mumin] (16: 99-100), because they can only work if the person allows them to work (7:30). Hence they can only work on those who turn away from ALLAH (19:83). Satan himself openly admits that he had no independent power over people (14:22).

The leader of all satans is Iblis (15:31). The basic principle of diabolical existence is reflected in the idea: "I'm better"(38:76), which is regarded as the cause of all conflicts and thus as original sin.

Some strange ideas about Satan - partly based on scriptures of other religions - have also crept into Islam. For example, a miniature in Siyer-i-Nebi (see below) shows how Prophet Muhammad (see) sitting in the mosque talking to Satan (bottom left in black) who visited him. 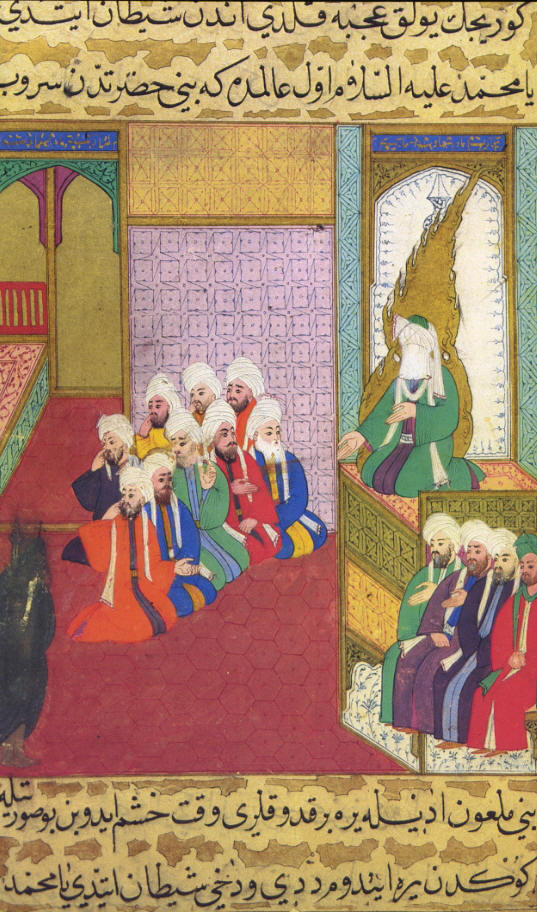