How are money service providers regulated

Berlin / Bad Homburg - In 2016, only three attacks on special money transport vehicles from German money service providers were carried out across Germany.

After the increase in the number in 2015, the new police crime statistics (PKS) presented today by Federal Minister of the Interior Thomas de Maizière and the Chairman of the Conference of Interior Ministers, Markus Ulbig, fortunately have a very lower value for the past year. "3 raids are 3 too many, but again a very low number compared to other European countries", says BDGW Managing Director Dr. Harald Olschok.

This number is even more remarkable when compared to the 2,500 special armored vehicles that are out and about six days a week to provide consumers with cash at over 60,000 ATMs and collect daily retail revenues safely and efficiently. This small number is the result of a successful collaboration between the employers' liability insurance association, property insurers and the BDGW. Their safety regulations are the result of decades of association work.

"In contrast to all other European countries, we have no state regulation for the transport of money and valuables," says Olschok. This also shows that the security concept used in Germany works well. Essential components of the BDGW safety regulations are the use of armored vehicles, two-man crew, GPS tracking of the vehicles, arming of employees and the use of transport security systems. 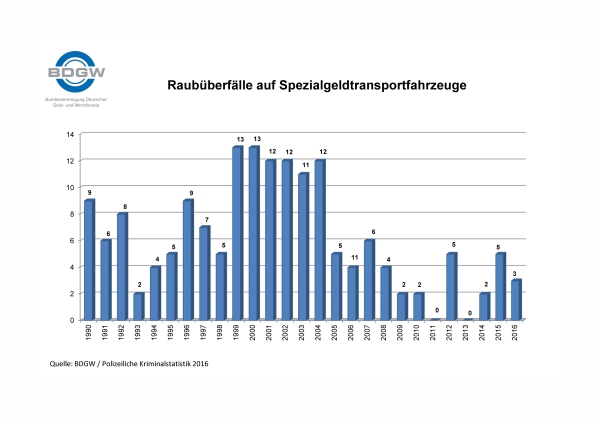 Industry information (www.bdgw.de)
The BDGW currently has 33 regular member companies, with a total of 92 branches, and 33 extraordinary member companies. In total, the industry has around 2,500 armored special money transport vehicles and employs around 11,000 people. 2/3 of them work in the transport of money and valuables and 1/3 in money processing. According to initial estimates, sales in the entire industry were around 550 million euros last year.