How can territorial disputes be resolved?

Deutsche Welle: How do you assess the question of responsibility?

Stefan Talmon: The dispute itself is complex. It is therefore difficult to speak in general terms whether the arbitration tribunal in The Hague has jurisdiction over the dispute as a whole or not. Some points can be clearly ruled out. The court is definitely not responsible for questions about territorial sovereignty over islands or questions about the delimitation of sea zones. But there are other questions that are in a gray area, which on the one hand deal with sovereignty and maritime zones, but on the other hand also contain elements that may well fall within the jurisdiction of the arbitral tribunal. The question to be considered here is whether a certain land formation is a "rock" or an "island" within the meaning of the UN Convention on the Law of the Sea. This classification is decisive for the question of whether a land formation can have sea zones at all.

The question is: how are the different elements weighted? The specialist speaks of mixed disputes. The court must clarify whether a part of the dispute that does not fall under the jurisdiction infects the other part, so to speak, and thus removes the entire dispute from the jurisdiction of the court. 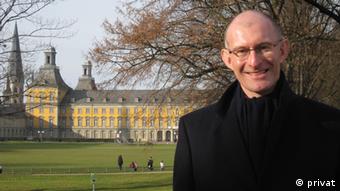 Will the court in The Hague give a simple answer to the question of jurisdiction?

There are multiple possibilities. It is quite conceivable that the court would declare itself incompetent as a whole. It is also possible that it takes the view that it is only responsible for parts. There is a third possibility. The court can find that it cannot rule on jurisdiction without hearing the main issues on the matter. So it can be that there is a main trial, but the Court of Justice then determines: We are not competent.

Should the Court of Arbitration in The Hague deny jurisdiction, would there be another way to deal with the territorial dispute through legal channels?

Subject of conflict: islands and rocks in the South China Sea

Do you consider the arbitration tribunal in The Hague or international law to be suitable at all to help resolve the dispute in the South China Sea?

When the parties to the dispute became parties to the UN Convention on the Law of the Sea, they committed themselves to a mandatory dispute settlement mechanism. So back in the 1990s, you saw your consent to allow certain maritime law disputes to be resolved on the basis of international law. Therefore, from my point of view, a legal conflict resolution is basically to be welcomed and preferred.

But there is another dimension here. If a party declares from the outset that it will not accept that the dispute will be settled in court, the question arises: what kind of function can international law then fulfill? In this case it seems very unlikely that the party will adhere to it even if an arbitration award is reached.

However, this does not mean that in such a case proceedings on the jurisdiction of the court should not take place from the outset, because it helps to clarify the legal situation. And on the basis of this clarified legal situation, the parties can then enter into negotiations again.

You raise the issue of enforcement. If there is an arbitration award, what are the chances that the judgment will be implemented?

What effects can the proceedings have on the international reputation of the litigating parties, the Philippines and the People's Republic of China?

A state must very carefully consider how it presents itself to the world public. But history is full of examples of great powers failing to abide by court rulings that contradicted their interests. The best example is the USA, which lost a trial against Nicaragua at the International Court of Justice in the 1980s, but has not implemented this judgment to this day.

In such cases, there is short-term great media excitement, but in the long term many other aspects also play a role in the public image of a state. A state has to weigh up. The more important the interests affected by the judgment, the more the state will tend not to implement a judgment passed against it.

Stefan Talmon is an international lawyer. He teaches at the University of Bonn.