Why is FGM important

Female genital mutilation (FGM) refers to surgical interventions on the female genitals, such as the partial or complete removal of the labia and / or the clitoris. The interventions are performed for traditional and cultural, not therapeutic reasons.

FGM is illegal in Austria, but women and girls from countries where FGM is practiced live here.

Affected girls and women can develop massive health problems such as abscesses, fistulas, urinary incontinence, urinary tract infections, gynecological and sexual problems and infertility. You bear the risk of a complicated birth and are at risk of suffering from psychological trauma and depression.

FGM Advisory Board of the City of Vienna

An interdisciplinary advisory board has been meeting regularly since 2007, under the leadership of the Vienna Women's Health Program. It includes experts in medicine, obstetrics and women's health as well as representatives from various areas of the city administration. The FGM Advisory Board carries out structural work in prevention and provides important impetus for the medical care of those affected in Vienna.

From a prevention perspective, it is important that people who work with girls know about FGM. The e-learning program "FGM - Female Genital Mutilation" of the Vienna Program for Women's Health provides information about the background and the health consequences of female genital mutilation. Further topics are the worldwide fight against this practice and the situation in Austria. The target group are people who work in kindergarten, school, after-school care or in the leisure sector. You will learn which signals indicate FGM as well as useful information for conducting a conversation. The learning program also shows what happens after a threat is reported to the Child and Youth Welfare Department (MA 11) - if violence against minors is suspected.

The e-learning was developed together with experts from child and youth welfare, the Vienna Child and Youth Ombudsman, the Women's Health Center FEM South and the University Clinic for Gynecology at the Vienna General Hospital.

The e-learning consists of 3 parts: 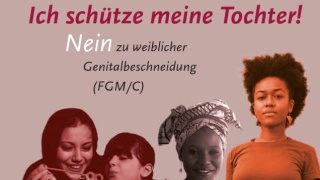 The folder "I protect my daughter" is aimed at parents and relatives of girls from countries with a high prevalence of FGM: The consequences for body, psyche and sexual health as well as the legal situation are explained in simple terms.

The "Guide to dealing with affected girls and women" provides information about the occurrence of FGM, the legal situation in Austria and the physical and psychological consequences of FGM. The guide gives tips on how to talk to those affected and provides basic medical knowledge for treatment in gynecology and obstetrics. Specialized contact persons in hospitals and counseling facilities are listed.

It is a cooperation between FEM Süd, the City of Vienna and the Vienna Medical Association.

Guide to dealing with affected girls and women: 1.8 MBPDF

Film "No to Genital Circumcision"

In 2013 the information film "No to Genital Circumcision" was produced by the Vienna Program for Women's Health, the Vienna Women's Service (MA 57) and the FEM South Women's Health Center. He explains the health consequences of FGM. A Christian pastor and Islamic representatives also have their say, as FGM is wrongly justified on religious grounds. The film was translated into Somali, Arabic, French and English in 2016.

Video: "No to genital cutting"