What does the communist flag mean 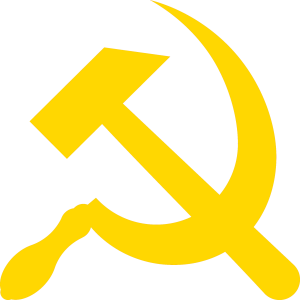 hammer and sickle are symbols for work in industry (hammer) and agriculture (sickle) stand. Usually they are intended to make a political statement.

In addition to these two symbols, the cogwheel, the ear and the Aesculapian staff as well as the Mercury for the symbolization of science and trade up to the beginning of the 20th century were often found. Ear, cogwheel, hammer and sickle can be found in political symbolism to this day, while Mercury and the staff of Aesculapius lost their importance in this regard.

The hammer and sickle is a symbol of communism. The use of the symbol is now banned in several states.

Hammer and sickle as components of political symbolism exist worldwide. They are not only used as official emblems on flags, means of payment or the like, but also by political parties. It is mainly left-wing but also occasionally right-wing organizations that make use of them. Their occurrence has been declining sharply since around 1990.

In the last century, the hammer and sickle were mainly used as symbols of communism on the flag of the former Soviet Union. The former state coat of arms of the GDR with a hammer and compass in a wreath of ears had the same function: to symbolize the “workers and peasants state” in alliance with the “intelligentsia”. The circle stands for the intelligentsia as a social class in the GDR, which means people with a university or technical college degree and artists.

On banknotes and coins of the German Reich, the Weimar Republic and the Third Reich, hammer, sickle, plow or bundles of ears were often found on the stylized worker. The symbolization of power and strength based on work was essential here. It was therefore no coincidence that the banknotes also displayed symbols that could be viewed as warlike and that embody defenselessness, such as B. the national allegory Germania with shield and sword. Until 1945 we rarely find hammer and sickle in pairs on German money symbols. For example, 5 marks on the Reich cash receipt - issued by the Reich Debt Administration in accordance with the law of April 30, 1874.

More often one finds hammer and circle together or at least in pairs in the symbolism of political right-wing organizations. This comes as anti-communist propaganda or in connection with an eagle, e.g. B. in the "Jungnationalen Bund" or in the "Deutschen Jungvolk".

From 1920 to 1934 and again since 1945, the eagle of the Austrian coat of arms also wears a hammer and sickle in its claws. However, this is not a remnant of socialist ideas, but, together with the crown of the wall on the head of the eagle as a symbol for the bourgeoisie, only pays homage to the three traditional classes on which the state is based.

In the flag of Angola, the symbolic statement is reversed, but retained in terms of content and graphics.

Hammer and Pick (People's Republic of the Congo)

Hammer and compass in a wreath of ears (German Democratic Republic)

In the national coat of arms of the German Democratic Republic, the symbol was made using the hammer (working class), the circle (intelligence) and instead of the sickle the wreath of ears (farmers).

The Chinese Communist Party uses a slightly modified symbol. The handle of the sickle is rounded, the yellow somewhat darker.

Symbol of the Juche ideology

The emblem is composed of a hammer, sickle and the traditional Korean brush (representative of writers and intellectuals). The ideological symbolism is therefore related to that of the GDR coat of arms. Here the symbol can be seen on the flag of the Labor Party of Korea.

In the flag and in the coat of arms of Mozambique there is a strong modification of hammer and sickle, the hoe symbolizes the class of the peasants, the Kalashnikov stands for the struggle for independence and the open book is supposed to represent the intelligence of the country.

National flags with hammer and sickle or similar symbols

These national flags are or have been hammer and sickle or used symbols modified therefrom:

Representation as characters on the computer

The hexadecimal unicode of the hammer and sickle symbol is U + 262D. GNOME allows hammer and sickle to be displayed as special characters while holding down Ctrl+Shift+ufollowed by the code 262D. The result is ☭.

Entering the string & # 9773; in HTML code also results in the symbol being displayed as a character.

The symbol from the Soviet era has been preserved in the national coat of arms of the internationally not recognized Transnistria.

The use of the hammer and sickle symbol, as well as that of the red star and other communist symbols such as the hymn of the Soviet Union, are in Hungary (since 1994)[1], Poland (since 2009)[2], Latvia and Lithuania (since 2008)[3] forbidden. In Poland, possession of the symbol can be punished with 2 years imprisonment.