A foreign citizen can join the CIA

It bangs, deafening. "What you see behind me here is the training of our new agents," explains Special Agent Kurt Crawford of the FBI's press office and has to take a break because of the background noise. "There is a lot of shooting here on the Quantico premises," he says, "over a million rounds are used every month."

The new agents in beige trousers and a dark blue polo shirt are standing in a large hollow in which the shooting range is located. They practice hitting the target with their service weapon, a Glock. For some, this is a new experience. "All kinds of people come to us," explains Timothy Delandy, head of training. "Veterans from the Iraq and Afghanistan wars, former police officers, but also farmers, zoologists and pilots. Some have never had a weapon in their hand in their lives."

Tens of thousands of applications 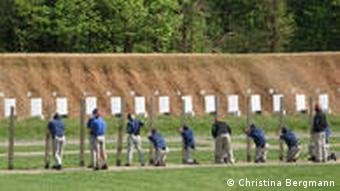 A budding FBI agent used around 3,600 rounds of ammunition during his training

Only men or women of American citizenship who are between 23 and 37 years old and who have already proven themselves in another profession can become an FBI agent. Which is not so crucial. However, those who can demonstrate success and, for example, have had personnel responsibility, have a better chance of surviving the selection process.

The selection takes a year in total. Of the tens of thousands who apply online, only around 7,000 manage to get admitted to the tests. 1100 are then allowed to attend the academy annually. Every other Sunday, a new class is welcomed to Quantico, says Delandy. Almost everyone would choose the FBI career out of patriotism.

"The newcomers always arrive on Sunday evening around five o'clock," explains the instructor. "On Monday they have to take their oath, do all the paperwork, fill out insurance forms and the like. Then they stay with us for 20 weeks."

The selection continues in these 20 weeks. Physical fitness is tested on the second day. If you can't do at least 30 push-ups without a break (the hurdle is 14 for women), you can try again in the 7th week - or you have to go. Short and long-distance runs and sit-ups are also part of the fitness test. 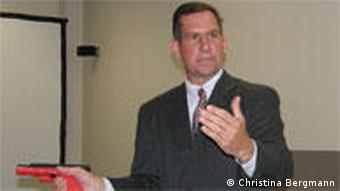 Athletic training makes up a quarter of the training for new agents, as does target practice. In addition, there is an equal share of theory: the agents must learn the laws and know how to do research and write reports. The top priority at the FBI now has the fight against terrorism.

Even before they get their hands on a weapon, special agent Richard Schott from the FBI's legal department explains to them when they can use this weapon: They have to adhere to the so-called "Deadly Force" guideline. This states that an FBI agent may only shoot "if he has legitimate reason to believe that there is a risk that the suspect will kill others or cause serious damage to their health in the immediate future," said Schott.

Shoot in the back

This is practiced with video simulations in a windowless room. The agent can take cover behind a metal plate and aims a prepared weapon at the screen. The respective situation is briefly explained in the video and then it says: Action! In this case, a man takes refuge in a bush with a gun in hand. He is suspected of belonging to a terrorist organization and of blowing up a federal building. The FBI agent is supposed to arrest him. And can and should shoot the fugitive in the back.

In real life it is different from television or film, explains special agent Schott. If agents had to wait to see what the suspect was holding, it could be too late. FBI agents also do not try, Schott explains, to shoot the gun out of the hand of the other or to injure his leg. Because this would not avert the danger posed by the man or woman. Therefore: fire targeted shots at the body of the opponent.

Special agent Schott has been in the service for 20 years. Although he has often drawn his gun himself, he has never had to shoot anyone, he says. Because: Despite the 12,000 agents who are deployed across the US, there are relatively few exchanges of fire with FBI agents. 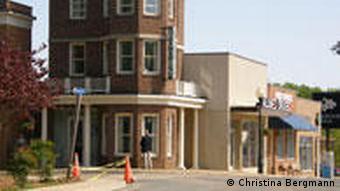 How an arrest can take place without a weapon, the agents should practice in the most realistic possible environment. That is why the last quarter of their training consists of practical exercises in "Hogan's Alley". This is the name of the street on the FBI premises, where there is a bank, a motel and shops. Residents and suspects are extras and behind the house walls there is sometimes a warehouse. But it is enough to practice house searches or arrests. The agents also have to learn, for example, to keep angry people at bay who want to prevent an arrest.

The basic training is over after 20 weeks. 850 agents make it every year. They should be able to be sent to one of the 56 FBI offices in the country. Your starting salary: a good $ 57,000 a year. After the basic training, they are able to work on all cases even in small offices with a few colleagues, says head of training Delandy.

"We know that they are not yet experts in financial fraud and that they do not arrest a gang member on the first day," he admits. "But then we have special training courses that you will complete later in your career."

So the FBI agents will return to Quantico one time or another.