What makes a Christian country

Survey: "Austria is a Christian country"

“Austria is and should stay a Christian country”: 51 percent of Austrians agree with this statement “very strongly”, another 25 percent “somewhat strongly”.

This “clear commitment” to the Christian character of Austria emerged from a representative IMAS survey in which 1,008 people aged 16 and over were interviewed from mid-June to mid-July.

Against the banishment of crosses

Christian content in schools and kindergartens is also indispensable for most Austrians. It is important to three out of four respondents (76 percent) to convey such values ​​to children and young people. Around seven out of ten Austrians (69 percent) are against banning crosses and Christian symbols from these institutions.

In general, the majority of the population is in favor of the practice of traditions and customs of their own religion (although no distinction was made here between Christians and Muslims): 19 percent of the respondents said this was "very important", and another 35 percent "reasonably important". For around a quarter (24 percent), this topic is not relevant. 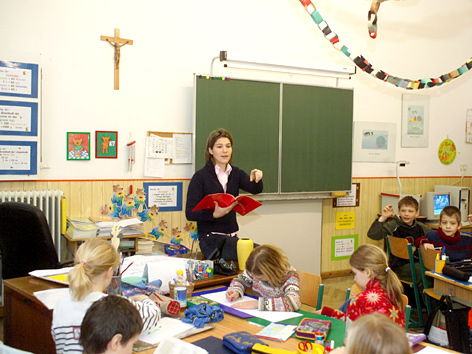 Attendance at church services has been falling for years

Another trend can be seen in church attendance: eight percent of Austrians recently attended church services regularly, another 19 percent occasionally. Comparisons with data from October 1973 show that the number of regular churchgoers fell from 25 to 8 percent. 32 percent currently never go to a church service.

"Own views about God"

In terms of their relationship with the church and religion, 37 percent of respondents feel that they are Christians to whom the church does not mean much. 27 percent state that they have “their own views about God” and do not need the Church or the Bible. Another 25 percent are loyal to the church. Only eight percent think nothing of the Catholic Church and are hostile to it.

According to the IMAS study, Christians in Austria can be divided into four groups: The strongest group are those who feel like Christians, but more or less refuse the institution of the church (44 percent), followed by Christians who believe strongly and profess the Church (31 percent). The number of Christians who only discover their faith in difficult times is significantly lower (19 percent). According to the IMAS, the smallest group are those who refuse to believe or are institutional (6 percent).